A little over years ago The San Francisco Giants were poised to make history if they could come back from being behind in the World Series games to win on the road in Game 7, a feat no team had done in 42 years. One of their biggest fans, Matt, was cynical at this time and doubted they’d do it, however, the team went onto make history and won their third even year World Series. As it happened Matt and I both had the day off from work the day of their victory parade, him as he’d asked work for the day off to help his mom decorate for his party, and me as I’d asked my supervisor way back when they were in the Division Play Offs if they won if I could have the day off, and so we, along with Candy went to our first victory parade. (A huge thank you to Matt who took most of these photos.) 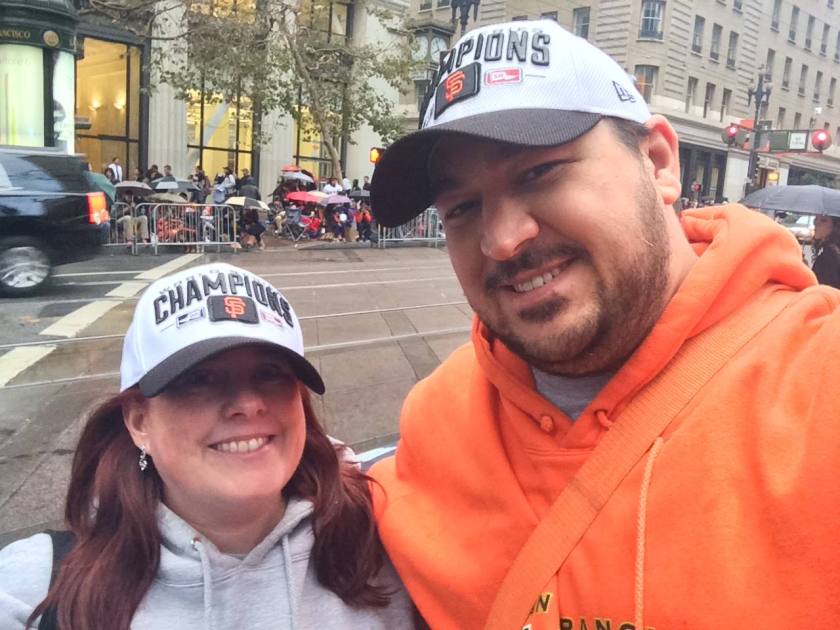 Parades will go on rain or shine, and rain that day it did. It rained so hard that even though we were there only a few hours early (as opposed to fans who may have been there overnight) we were still able to get a good viewing spot near a front gate. It also does not hurt in cases like this that I’m petite, so people tend to let me move to the front to see things. Candy brought along her umbrella featuring a nice sunny day theme inside.

We all proudly wore the World Champions gear we’d purchased soon after it had become available in the marketplace.

Looking at these photos, they are truly snapshots of moments in time. At the time of the parade Pablo Sandoval, “The Panda” was a huge part of why the team had done so well, so he had this fun float in the parade. Though Pablo would leave the team since then and rejoin this year, it was never quite the same for him or his performance.

Despite the rain and wind, it was a wonderful day for a parade, that featured so much Giants colored confetti.

It was amazing seeing so many people coming out for the event, including some very lucky people who got to see from balconies.

It was amazing seeing so many of our favorite baseball players. One of the true cheerleaders amongst the players was Hunter Pence, who is part of the inspiration for our son’s middle name (the other part is Hunter Hearst Helmsley aka Triple H of WWE). 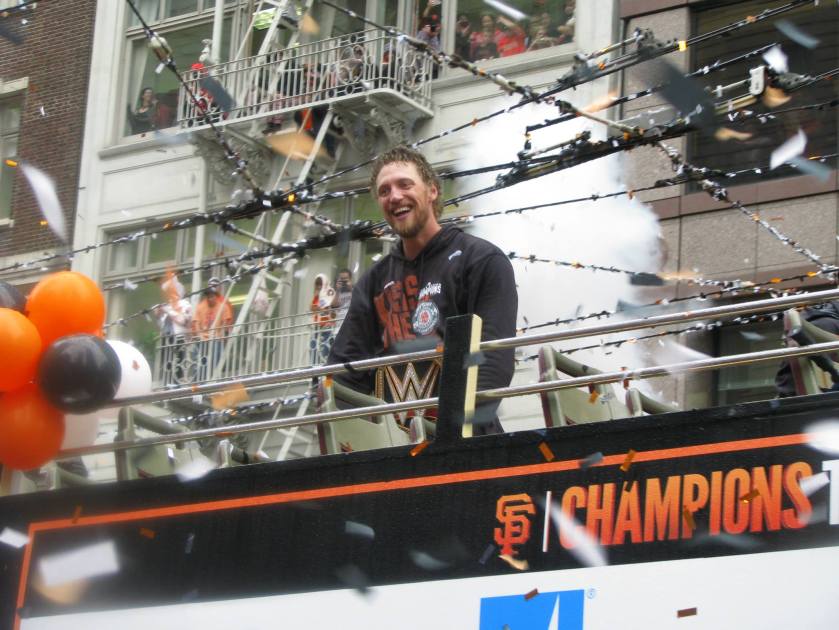 I was shocked the Hunter did not share a bus with Daniel Bryan, a WWE wrestler whose “Yes! Yes! Yes!” cheer Hunter had brought to the Giants for when he or others hit a home run. I was so surprised and excited to see Daniel on a bus. 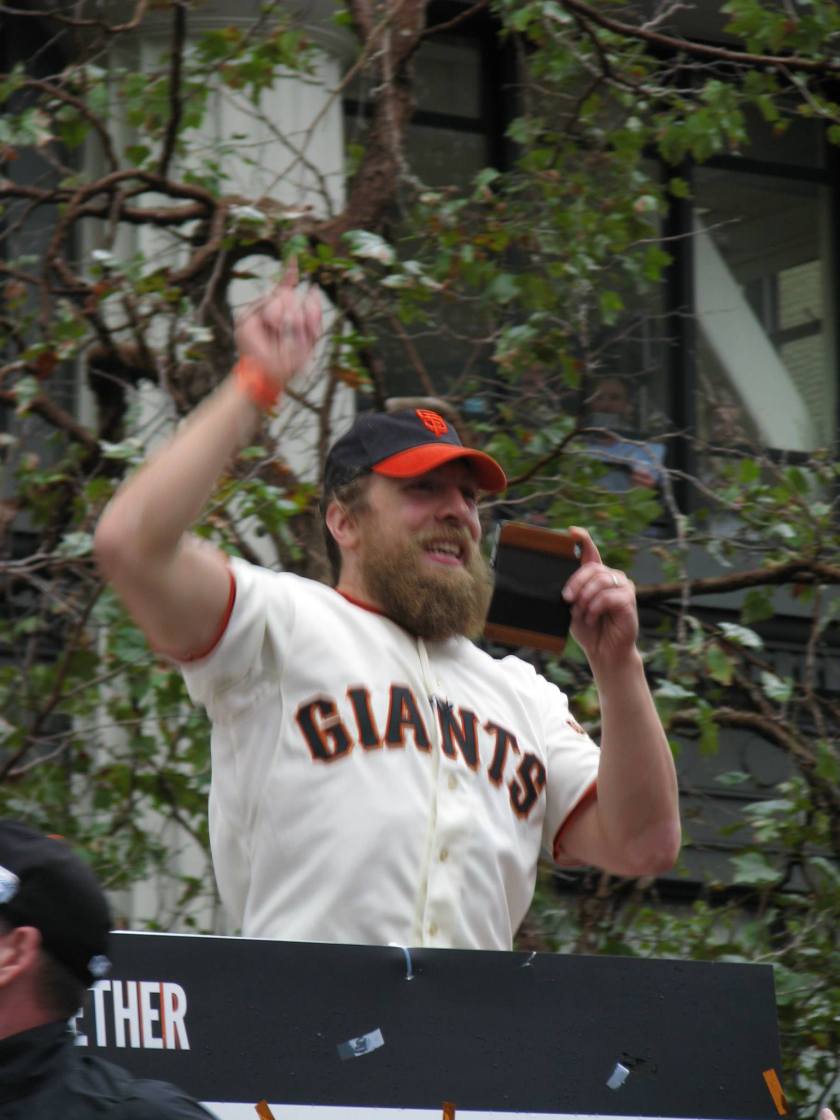 Here he is doing his official Yes! Cheer arm movements for the crowd.

It cracks me up how stoic the team’s manager, Bruce Bochy, was that day. 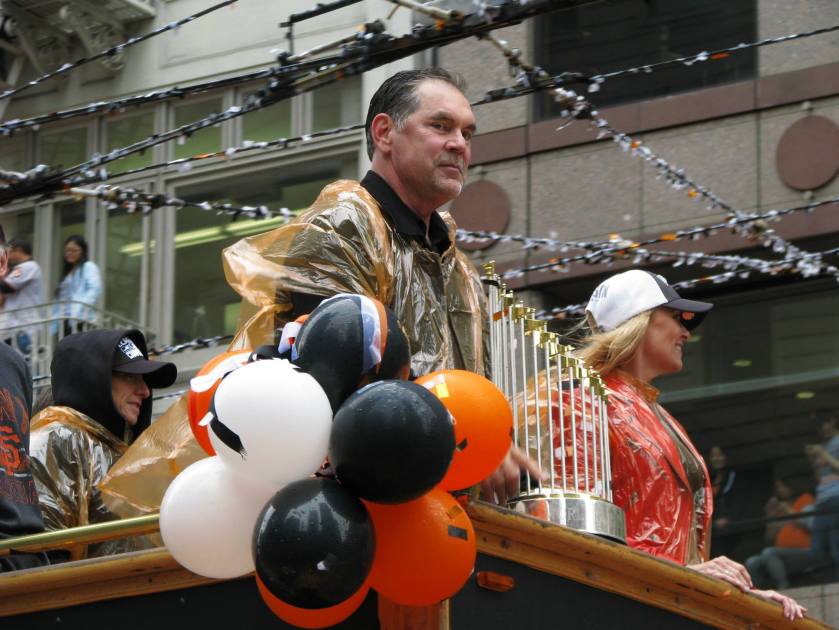 It was also great seeing one of my favorite players, Madison Bumgarner. Madison was our inspiration for a middle name if we’d had a daughter instead of our son.

I’d love to think that we will someday in the future be taking William to his first SF Giants Victory Parade.