Our wedding day was one of the happiest of our lives. In addition to living on in memories, our day lives on in the over 1000 photos our amazing photographer, Chance James took. Ironically, though we’ve now been married a year, we haven’t ordered a wedding album yet, though I did consider it as an anniversary present. There were so many wonderful images that tell our story. We were married on Monastery Beach on Carmel by the Sea. It was a beautiful and cool day. 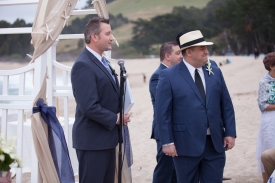 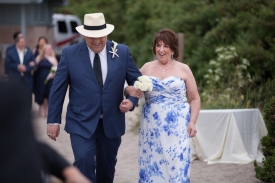 It was very important to Matt and I to honor our late fathers in our ceremony. I was walked down the aisle by my mom (in gold) and my Aunt Carol (in purple), my late dads sister. We also had photos of our dads placed on a chair in the front row and had white roses put on their chair.

My mom, aunt and Candy, all carried white roses as well. This was a tribute to my mom’s wedding to my dad, for which she wanted to carry white roses, but was told in June in NYC they would be out of season, yet in May in California, they were in season and looked great. 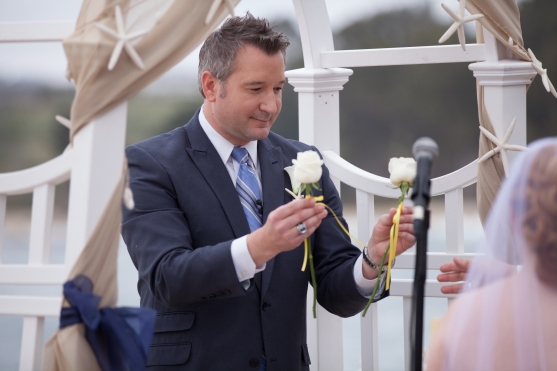 Matt and I have so much fun in our everyday lives that to no one’s surprise our service, performed by Matt’s cousin, Gary, along with our vows had lots of funny moments. Matt’s sister in law’s sister, Sarah, did a reading which she first started by quoting the priest in The Princess Bride’s lines about marriage (pronouncing it as “mawaiage” as he did cracked everyone up. We also did a sand ceremony pouring sand into a frame we proudly display in our living room. 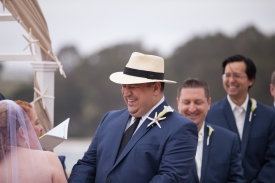 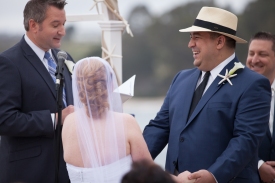 I admit it, I spent hours and hours on wedding details. I wanted the blue shoes that Carrie Bradshaw wore for her wedding day in the Sex and the City Movie, but I wasn’t going to spend $900 on shoes. Instead, I had a custom inspired by pair of heels (for the reception) and flats (for the ceremony on the beach) made for less than a third of that. I got lots of sand in my shoes.

Being WWE fans, we had to incorporate that into our special day. According to our DJ, we are the first couple he ever had to request separate intros. He introduced Matt to Shane O’Mac’s theme song, “Here Comes the Money” while wearing a WWE Champion belt. Then, in another first for our DJ, announced me himself, and I came in with Daniel Bryan’s theme song, “Flight of the Valkyries” wearing the Women’s WWE Champion Belt and had people doing his “Yes! Yes! Yes!” cheers around me; Matt had had some doing it around him as well.

For our first dance, we chose Maroon Five’s “Sunday Morning”.

Matt danced with his mom and were laughing and beaming in almost every photo taken of them as they danced to The Muppets version of “Rainbow Connection”.

Later, I had our wedding party and my aunt make a circle around us as Matt and I danced to “Forever in Blue Jeans” in a tribute to my father. 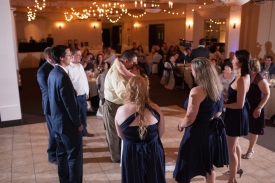 It’s hard to pick favorite images as I have so many, but definitely some of the couple ones of us late at night are amazing. 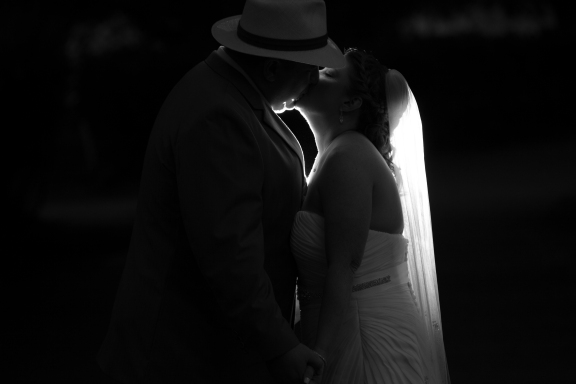 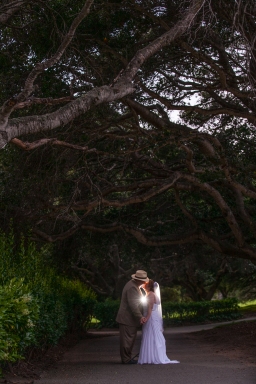 Our wedding day was amazing and I’m so glad we got to celebrate with so many family members and friends.