This year’s Throw Back Thursday is dedicated to Red Nose Day which we are celebrating today in the US. This holiday which originated in the UK in 1985, and they had their celebration last month. Three years ago this event crossed over to the United States, and while I did not know it was going on then, last year I did, as did Petra who served as Maid of Honor on my wedding day. We both proudly donned the red nose for the event, to raise awareness of and funds for children in poverty.

With people being so busy between work and home life, it’s great to be able to participate in a charity that makes it so much fun and so easy to join on your own time. Purchases of official red nose day merchandise including noses, bracelets, necklaces, etc. were part of donations to the charity. More information on it can be found at: Walgreens Red Nose Day 2017 Info.

In addition to being a fun day, it was also was the day I took the first post wedding step in changing my name. Though California has you identify your new last name (if applicable on the marriage license), the real process starts when you get your license back and have to start at Social Security. Though coworkers had joked I’d be there all day, I was there early and was processed through quickly. You can see my Red Nose Day necklace in the reflection. 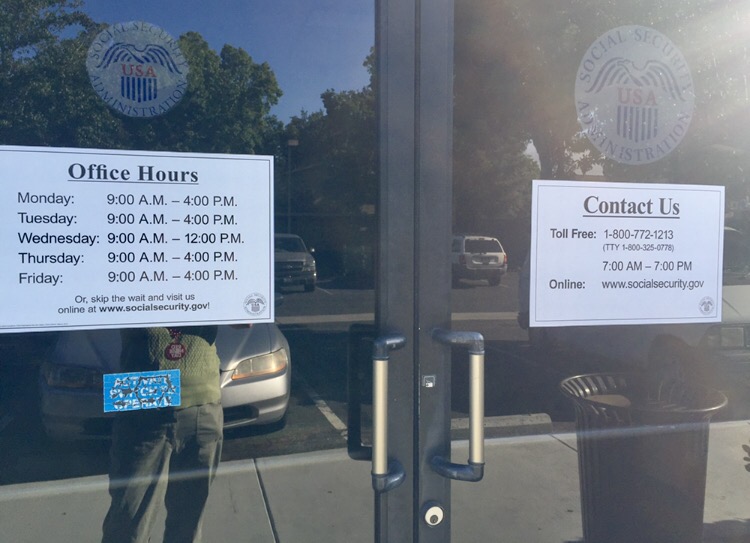 This year I decided to go all out on my participation. First in addition to the red nose and bracelets, I put in 11 red hair extension clip ons. The sunlight vs. natural light looked so different on my hair both real and synthetic. 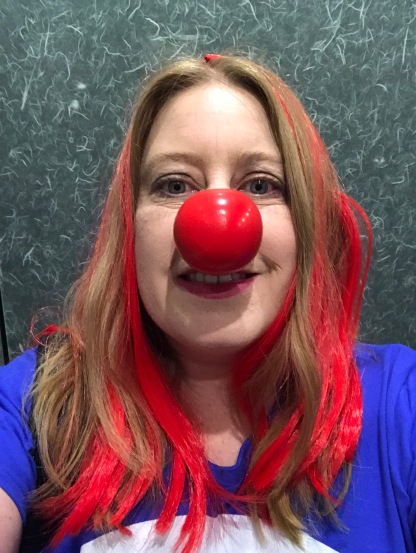 I wore my official bracelets from last year and this year. 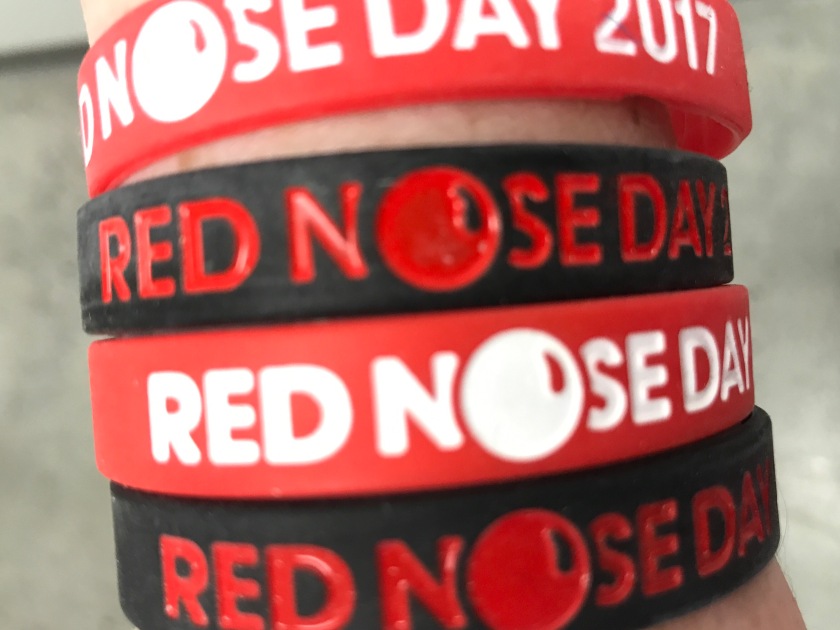 Lastly, I wore a special Red Nose Day T shirt I found on Amazon. It wasn’t easy to keep a nose on for long and work effectively, yet this shirt helped me keep the look of a nose on all day, and I just like the fun colors. Company C is very relaxed on dress code, so it was fun to be able to wear so much to represent this, though I am the only one here today who did.

Red Nose Day in the UK also meant many comedy shows and shorts were produced. I will have to watch the 10 minute sequel to Love Actually called Red Nose Day that shows what happened to some of the characters from the first movie 14 years later. I look forward to participating in this next year as well.

Of all the things I wore today, my hair was the most noticed. I received lots of compliments on it at work with a few people thinking it was real.

After work I had to go to the grocery story and behind me was a mom with her young daughter of about four or so who saw me and yelled, “Hey mommy, she has color in her hair! I want color in my hair like that!”. The mom, having thought I had dyed it told her she would have to wait till she was much older to dye her hair. Upon hearing this I turned around and showed them both they were clip -ons and took one out and put it back on. At this the mom asked where I bought them and I told her Amazon. She then told her daughter they would be getting some. Ironically I had been telling a friend today that if my child is a daughter I may be putting clip ons in her hair someday.