Yesterday I had my 23 week check up with my OB, Dr. G. The appointment went well and I’ll be blogging about it in detail tomorrow. One of the main questions I asked him was about trying something else exercise wise as I was finding just walking, which I’ve been doing for the bulk of my workouts too boring. This is not new for me, I love mixing up workouts which I was I’ve done so many hybrid workout programs and should try Crossfit after enough time has gone by for me to heal from my delivery. I was hoping to get cleared to jog even a little, however, Dr. G said it was too high impact for my pregnancy. Instead he suggested a piece of equipment I hadn’t even considered at this time, The StairMaster.

I’m lucky in that our apartment has gym facilities. I knew we had several StairMasters along with several other machines. We have two that are the type of the device on the left and one that is the type of device on the right. 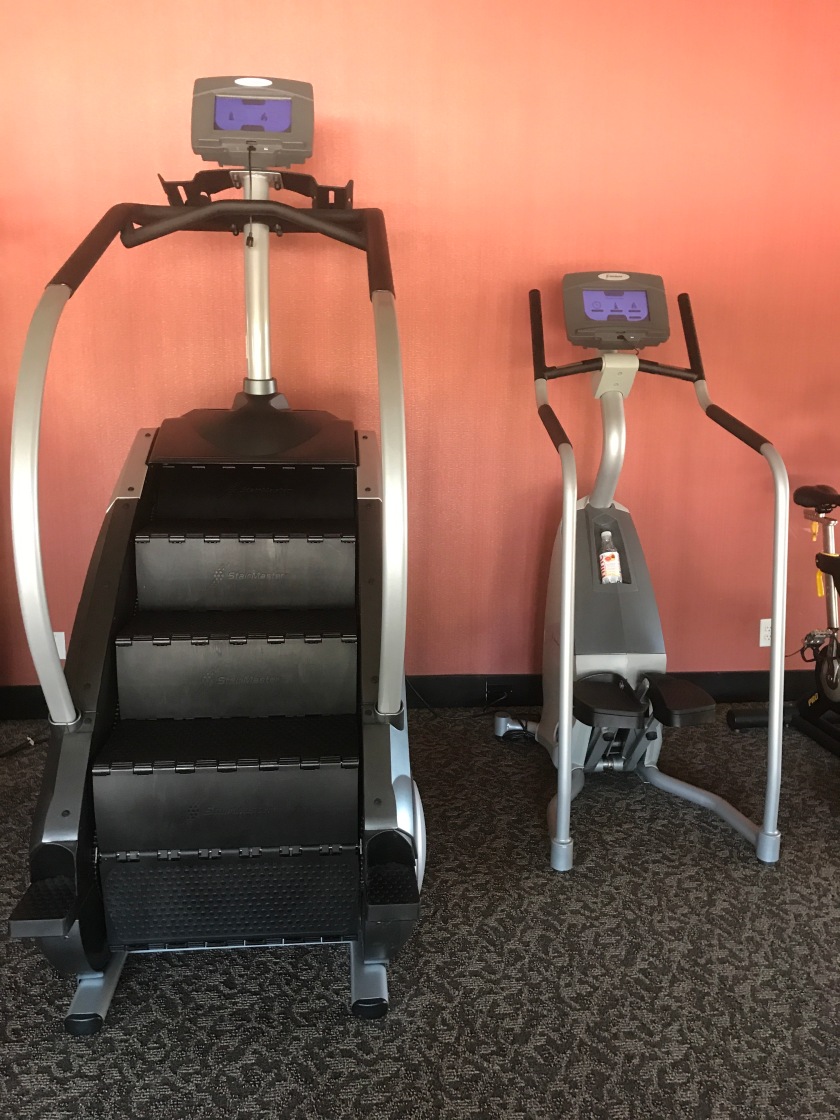 Although the devices are made by the same company they are very different. This device has the stairs itself move and the participant moves his or her legs to climb up the stairs. There happen to be two holder at the top perfect for a sports drink or water which can be easily removed to consume and replace.

This device does not have stairs that move, instead the feet stay on these pedals which move up and down. There is a place for a single water and while it’s tricky to grab it during a workout it is possible.

At first I started with the moving stair type. I’ve actually found this style intimidating and always thought I’d fall off the darn thing someday. The first machine I tried was having some sort of problem (though was not labeled as broken) so that when I climbed onto it and it should have been turned off, it was already stepping so that the action of it was opposing my stepping actions. I found feet coming off the machine, yet with a nice grip on the sides, balance and some plain old good luck, I was able to land on both feet with a smooth landing near the floor. I’m sure Dr. G would not have been happy to hear this detail. I was all set to try the second similar machine when I realized the other style machine was also a StairMaster, and a safer and more low impact one option for me.

It was great to be able to use this machine as it’s similar to the elliptical, one of my favorite, just without the arm swinging. I had wondered if he would have approved the elliptical, yet had no thought to ask. The machine workout was a nice build up and it cracked me up that it increased the number of floor goal ever so slightly here and there to keep you motivated.

Another great feature was it mentioned landmarks you had climbed. The first one was something in NYC, the second the Taj Majal and I made it all the way to Big Ben and over. Though I wish the graphics were more elaborate, it was a great workout just over 20 minutes. It was a great workout that had begun with fie minutes of a light treadmill walk and ended with a 15 minute treadmill cool down. As is typical of any workout I do that is not super easy, my face got red fast. Hours later I feel a bit sore as some muscles which haven’t worked a lot in pregnancy have been activated, and I look forward to future workouts.