Yesterday Matt, Candy and I went to my 23 week check up with Dr. G. In this appointment, like the one before it he did not take any sonograms, so in this blog entry I will include some of my favorite sonograms so far. This was the first series of ones we received, looking at them even now I still can’t make out a lot of the structures I knew he saw but it was so great to have them. We didn’t even realize at the time that not all babies at 6 week will show a fetal pole heartbeat (and can still be normal and healthy), so we were very lucky to have the sound confirmation so soon in my pregnancy.

At this appointment I asked quite a few questions, writing them down for the first time since our first appointment. My questions included whether Belly Buds were safe for baby’s hearing, as to if Bio Oil was safe for me to use for stretchmarks. Dr. G gave me the yes for the Belly Buds and a no on the Bio Oil. We also talked about if swimming in rivers and lakes was safe, both of which I got a thumbs up to (and may be doing this summer as part of plans with friends later on).

This sonogram series was taken about a month after the first, and while the baby structures are still hard for me to make out, the heartbeat looks so strong and even.

At this appointment as he did the last one, he measured my abdomen. I should be one centimeter for each week I am pregnant, so 23. He has not given me the measurements for this week or the one before it. A coworker had told me I looked more pregnant on that day, Thursday than I had a few days earlier on Monday. While I know I had a tighter fit shirt on Thursday, this may be the case.

This is the first series of sonograms I had taken for my anatomy scan. I love how clear the baby is and how s/he appears to be trying to sit up a bit in the first one.

As he had after the first anatomy series, Dr. G remarked that the baby looked good on all of the second series of ones I had including having the placenta which has been a bit low moving up a bit more in the weeks in between. 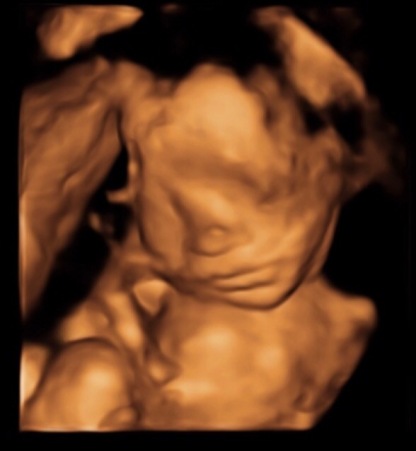 We talked a lot about the delivery. He confirmed that if my water broke even if we were at home in San Jose we’d have plenty of time to get to the hospital in El Camino. He said in all his years of being a doctor there had been only one baby born in the car ride over, and that was a second child, not a first.

Though everything looks good, he said he’d like me to come in again in two weeks, going back to the original schedule we’d had since my first visit.