One week ago William was christened at Almaden Hills United Methodist Church. It was a day that had come after much planning on all sides. I was so honored when Candy had asked me if I wanted him to wear the family’s Christening outfit. I was so touched by the offer and immediately accepted, so that he would be the fourth generation Perri to wear it. In addition to the slip, hat and gown that had been in the family and passed down, he also wore a few new items. His socks with an embroidered cross and shoes were presents from Candy. The necklace had been given to me, when I was still pregnant, by Peggy Joy,  the Children’s Youth Ministry Leader, who had made similar necklaces for the children of the church. Peggy Joy loves holding William, so we had to get her posing with him while wearing his special necklace.

We were joined in person by his grandmothers, Candy and Iona, his Godmother, Kristi, and friends Katie and Cliff. We had a lot of photos taken that day by Cliff (who also took a video of the service), Church Photographer Bonnie, and I took a few myself before the ceremony.  William’s Godfather, Gary, joined us via Face Time, and he even wore a blue suit for the occasion. In this candid Kristi is showing William that his Godfather is joining via technology.

Before the service Pastor Mariellen came over to meet everyone. It was great to have her take the time to get to know our family a bit. 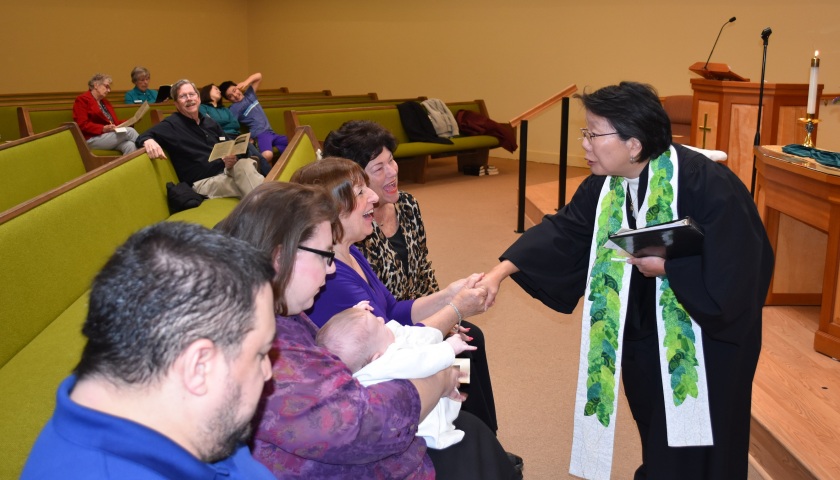 Though she had preparations to do before the service, she also took a group photo with us.

Then, being it was such a special day, we took many portrait combinations of those of us who came out to be there for William.

After our portraits, it was time for Kristi, Mariellen and I to sit down and go over ceremony details. Kristi was appointed to announce everyone on stage both as she is the Godmother and as she has a voice with great projection. William did not sleep for any of the ceremony. He was smiling, eating or crying. Luckily, he was all smiles for the part where Pastor Mariellen held and baptized him. The church projector screens showed a photo of Gary and his sons, and then a photo of William and I for and his name woven into the chorus of the hymn, “God Claims You”. 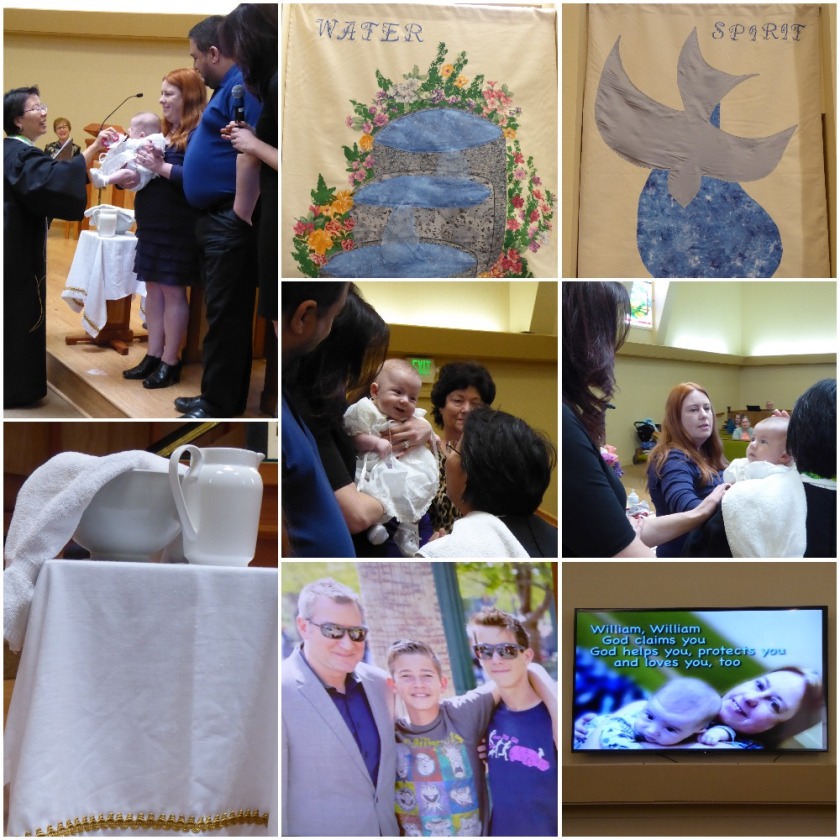 After he was baptized Pastor Mariellen walked him around the front rows of the pews so that his new church family could all see him. Bonnie presented us with a baptismal certificate and card.

It was a beautiful day for all. I’m so glad I have a video of the day, along with all these great photos to remember it, and to show William someday.