For many years I’d watched the Super Bowl at some sort of party. Matt and I had gone to a few together, and had even thrown a few. This year we decided to try something different, using the money we would spend on a party to go to a party at a restaurant right outside the 49ers Stadium. At first, we were planning on bringing William. I was told I could, however, as we got closer to the day, we agreed it would be too loud and chaotic for him, so he stayed home with Candy to watch the game and cheer on his temporary favorite team, The Philadelphia Eagles. I love how he even looks like a football player all bulked up with shoulder pads for this one. 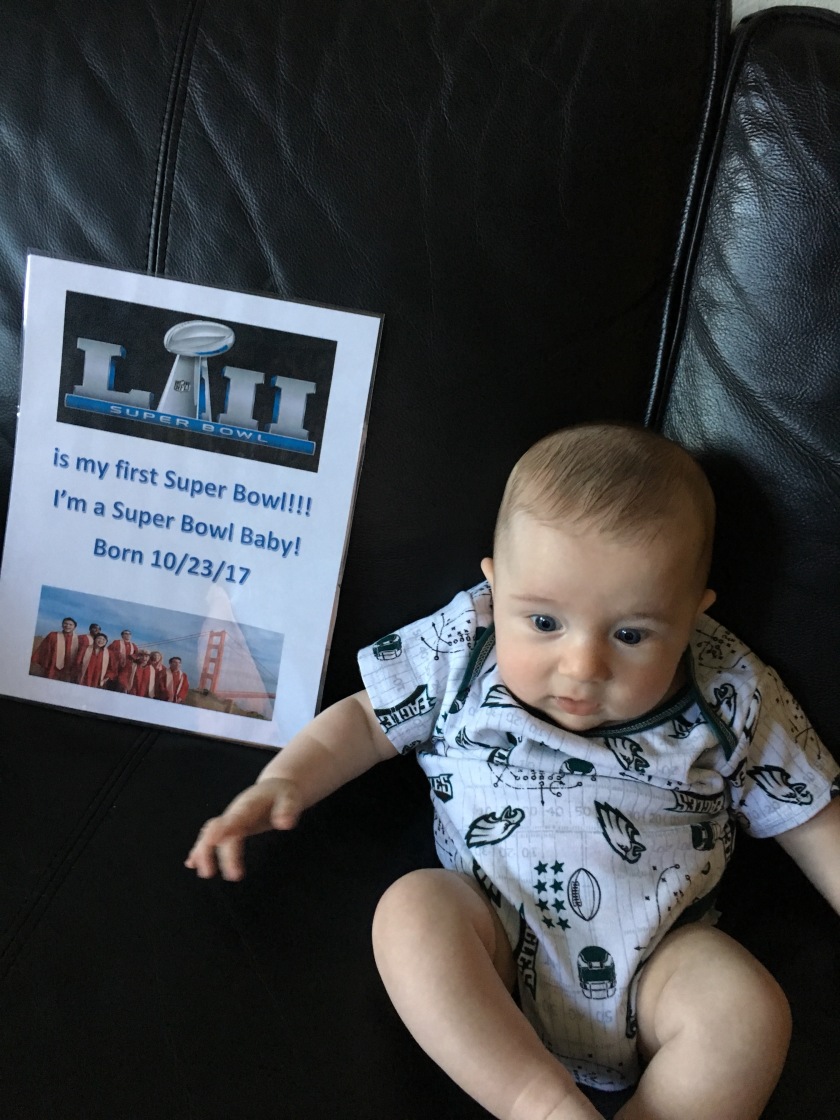 He was content to watch quite a lot of the action on television. Candy said he made it to about half time, though it appeared he liked the moving shapes and colors more on the commercials than the game itself.

Our friend Martin offered to drive, so Matt and I put on our 49ers shirts, I put some clip ons in my hair and we were on our way to the party.

The event was first come first serve for seating, so we showed up extra early to be the first ones in line. We then had time to take photos around the area.

This is the front entrance of Bourbon Steak and Pub. The party was held in the more casual and less expensive Pub side.  Matt, Martin and I had all eaten there before and were excited to try the special game day menu.

In addition to having time to sight see and take photos, I had time to pump. With the help of a nursing scarf, I was able to do so right outside, without any part of the area undermy shirt being exposed. 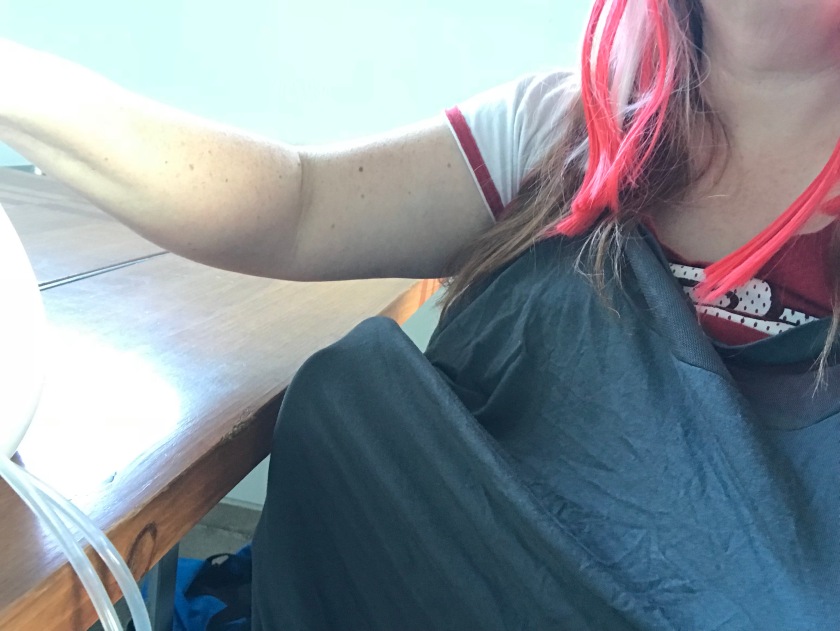 As we were early I also had time to speak to the manager who said he would find me a private area in the loft to pump whenever I wanted. I told him I would use the halftime show. So after a great first half with yummy buffet food including hot wings, nachos, macaroni, ribs and more, I was led up to this private area. I sat on a couch just like the one in the photo. 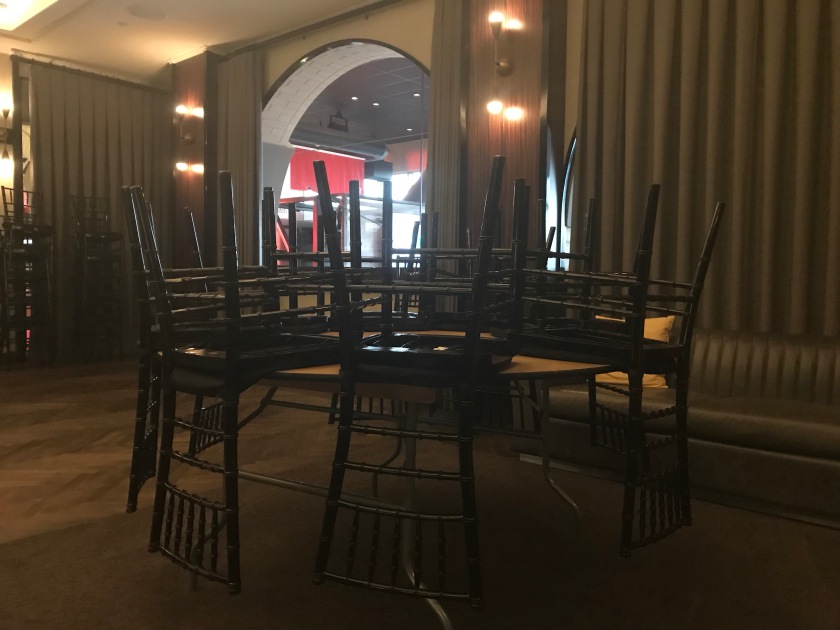 From where I was, I was able to hear the half time show and pump. It was great having a locked private area. It really helped me have a great time at the event, knowing I was keeping up with my pumping schedule to keep my milk supply as steady as possible.

Another great part of the day was the chance to meet and have our photos taken with several members of the Gold Rush, the 49ers cheerleaders. 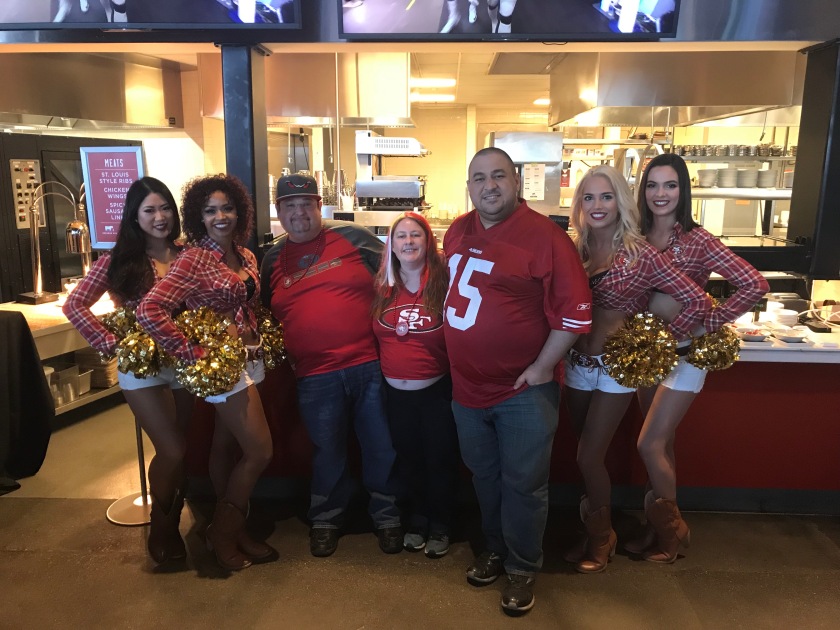 I cannot remember a more action filled Super Bowl. I had so much fun cheering on The Eagles and joining Matt at yelling at the refs for bad calls. I definitely see this as a tradition we will want to keep going for years to come, and in a few years, perhaps when he is about five or so, William might truly enjoy watching the game and enjoy the loud pub setting as well.