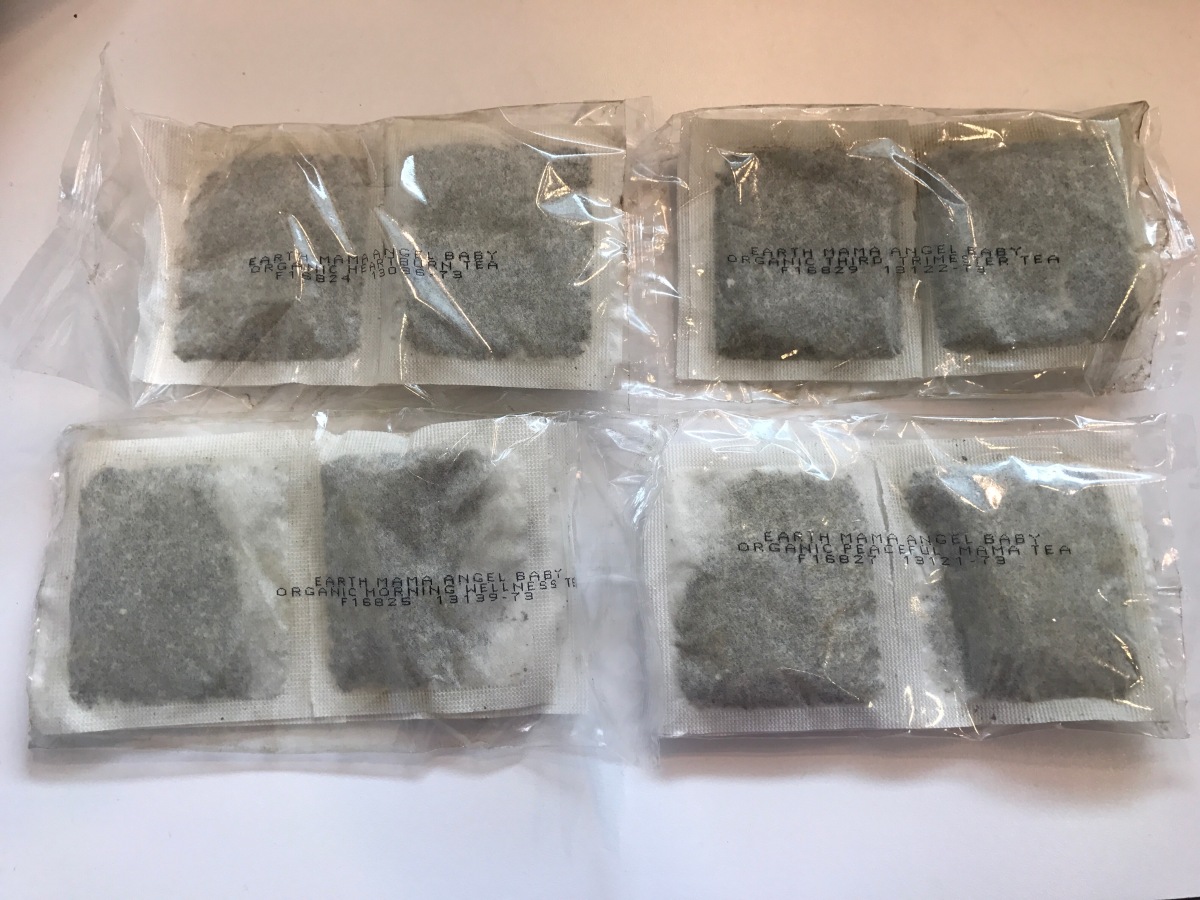 One of the recommendations pregnant women are given is to avoid high amounts of caffeine for the safety of their developing babies. As a result many women choose to significantly decrease the amount of caffeinated coffee and tea they drink. As only an occasional coffee drinker, giving up coffee entirely was easy for me. I do enjoy tea, however, so I was excited to try Earth Mama Angel Baby Organics’ Mama to Be Tea Sampler.

Although I had received this tea earlier this month, this warning on the box to talk to my health care provider about the use of herbs in pregnancy was enough of a warning that I asked Dr. G about it at my last visit. He seemed pretty skeptical that the ingredients would do anything helpful, in particular calling out the organic spearmint as one of the many useless ingredients, however I had his blessing to give them a try.

The first thing I noticed when opening the package was the unusual packaging inside. In an effort to be the most green product possible, which I do applaud, the tea samples are not in individual packages. Each of the four varieties is packaged with others of the same variety in a plastic bag. Once out of the bag, however, there is no way to tell one variety from another. It wouldn’t be practical to write on the bags themselves, but there is no effort to make the bags look different from one another, perhaps by making them different shapes or sizes. The plastic bag is not resealable, either, so after opening a bag and taking one out, I ended up stapling the bags back together. 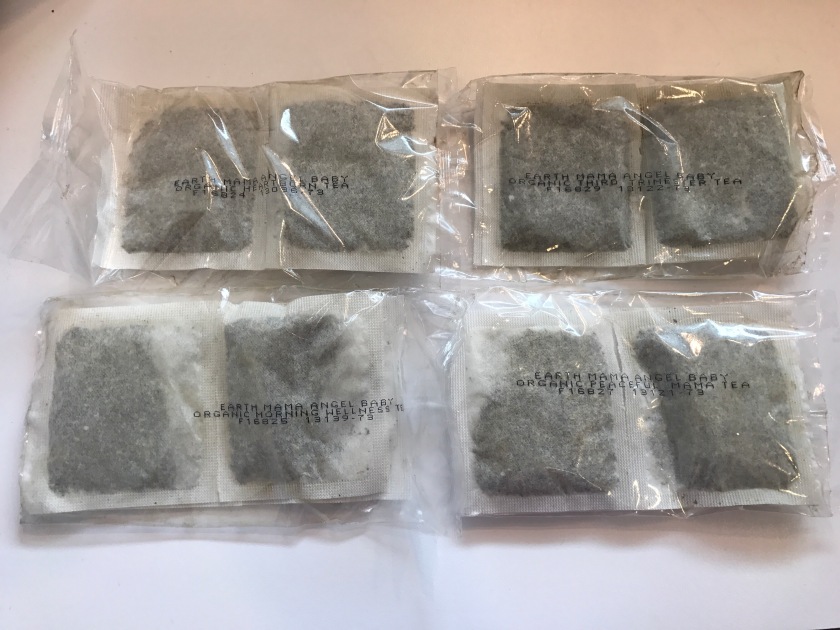 As a big fan of lots of tea flavors, I was truly hoping that these would be great, especially as they had varieties consumable for pregnancy and ones that could be consumed in pregnancy and when breastfeeding, which I plan to do for baby’s first year.

The first tea I tried was the Heartburn Tea. I have been lucky in that I haven’t had lots of heartburn this pregnancy, however, I have had the expected cramping, so I wondered if it might be helpful with that. My first taste was disappointing. Despite following the directions exactly, I didn’t notice any recognizable flavors I should have including spearmint or raspberry, both flavors I like. In fact, the flavor was just bland, almost as if I was drinking hot water with a paper in it without any tea.

Despite my first one being bland, I keep an open mind for my second variety to try, Morning Wellness Tea. I actually had this in the afternoon, having not had time to grab tea in the morning due to a busy work schedule. When separating the first tea bag out I ripped part of the bag. I debated putting it in the water anyhow, but didn’t want the herbs directly to be something I drank, so I threw it out and opened a second bag.

This tea also, was very bland, in fact it tasted even more like paper in water than the first one. I wasn’t even able to finish this tea, giving up halfway through, which is very unusual for me, I finish almost every cup of tea I make for myself unless I have let it get too cold to drink. With herbs including citrus, orange, lemon and peppermint, some of my favorite flavors, it was truly disappointing I could not taste a one of them.

After this disappointing sampling, I tried the Peaceful Mama variety. I was determined to stick this one out. I didn’t feel any more (or for that matter) any less calm with it, and again the bland wet paper taste was all I could get out of it, instead of the lemon, orange and raspberry flavors I should have been able to taste.

I gave up entirely on this product at that point. There was a Third Trimester variety, but being far from in my third trimester at fourteen weeks today (and according to some source the start of my second trimester), I had no desire to try it early or even save the tea for a few months. In fact, having been unimpressed with the three that I did try, I will not be finishing any of the tea I had left.

I’ve given some thought to why the tea tasted so bland. I did follow the directions and tried it both in a paper cup for the Heartburn Tea and a stainless steel thermos for the other two, so I do not think it’s a preparation error. I have in the past used two tea bags at once occasionally to get extra flavor, however,I did not try it in this case as I’ve more often only used one bag at a time. I’ve not added any sugar, lemon or other sweetener to teas after having discovered I was pregnant, so it is not that, either. I believe the answer is that the tea itself to many people is just bland. In the negative Amazon reviews of this product that comment is often mentioned, one reviewer going so far as to describe the flavors as tasting like feet; though that reviewer did say that the tea worked as expected for her in terms of effects on pregnancy symptoms.

This tea may taste different to other pregnant woman and/or help with their symptoms, but neither the flavor nor relief of symptoms worked for me.