It’s so much fun for me when people acknowledge my growing bump and baby within. It’s also fun to be able to tell someone who does not yet know as often they have such a wonderful and positive reaction to the news. A few weeks ago I was running errands and happened to go to Starbucks. They were advertising their Smores drinks and as I’m an avid fan of them, I wanted to have one, yet had to ask if it was possible to get one made decaf as I was expecting. The barista suggested she make me a cream version which would have no coffee at all in it, and it was delicious. I didn’t even realize at first the shout out she gave Baby Perri with a +1 on the name. It made an already Starbucks visit even better to find it there.

Pastor Jane had emailed me earlier in the week to tell me there was a gift for our baby in her office. She described the package and it was right next to a similar one with another baby’s last name on it.

This was her last sermon as the Pastor of Almaden Hills United Methodist Church. Instead of a traditional sermon, she talked about how events in our church community made up a Gospel story for her and how the same for us was true as well. 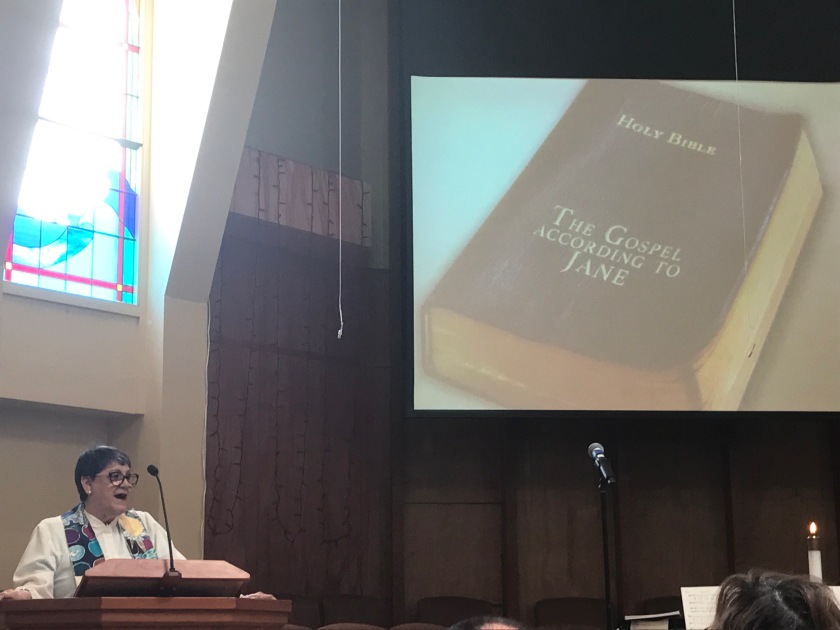 The sermons are printed out so we can follow along. I was especially thankful that this one was as Baby Perri and I got a mention in it.

It turns out that I was sitting in the same row as Ashly and Sean and I was able to talk to them later. I do hope they are able to come and stay within our group (which will depend on their work schedules) as it would be great to have another child grow and develop alongside ours. I also found it fascinating that they too are Team Green, in their case both of them are waiting to be surprised by their baby’s gender at the birth.

Although I don’t have any vocal talent, some of my favorite memories have been singing silly songs with Matt, often classic ones where we’ve changed the words to make them more about us or each other and a few I’m not even sure where they ideas or tune came from. I’ve been singing more to baby now and was singing “Dancing with my Bump” one day on my way home from work. As if he knew I’d been doing so, Matt came up with lyrics to “Bump” instead of “Lump” that went something like this:

“Bump sat alone all in the dark

Heard no noises, except for a heart

Bump sat alone in the belly

The timing of the song was hysterical, as was the fact that while I like a wide variety of foods, that’s one kids favorite that not only haven’t I had since finding out I was expecting.  pregnant, I can’t remember when I last had it as  sandwich.

Inky being a cat can’t talk or sing of course, but quite a few times she’s cuddled up to my bump and purred. My guess is she knows there is a baby inside. As she does it right next to my bump, I imagine baby can feel and perhaps even hear the vibrations to some extent.