One product type that Matt and I have tried many of is teethers. We know William is definitely teething and try all we can to help him with the associated pain relief. Still, despite trying a Teething Egg and Organic Teething Toys, we hadn’t found one that was perfect for him. So, I was definitely skeptical of the Little Teether toy that was part of William’s Bluum boy this month. I was intrigued that it came in a soft, reusable pouch, perfect for keeping the toy clean when transporting in a bag.

The Little Teether was the featured product of his box this month, meaning I saw on preview that that was what we were going to get. However, the photo that I had of the toy did not show the adorable case it comes with, just a possible shape of one, which ended up not being the one we received.

The shape that had been the one shown on the  preview was the dark green one at the bottom of the card, that their website refers to as a cactus. I had hoped I’d get that one as it’s an adorable shape and sort of looks like a W with a long tail.

So this one, I had thought was supposed to be a B. “Perhaps they sent all boys B’s and girls were sent a G,” I remarked to Matt. It turns out they don’t have G shapes. When looking at the Little Teether product catalog for this review, it turns out that it’s not a B, but supposed to be glasses. 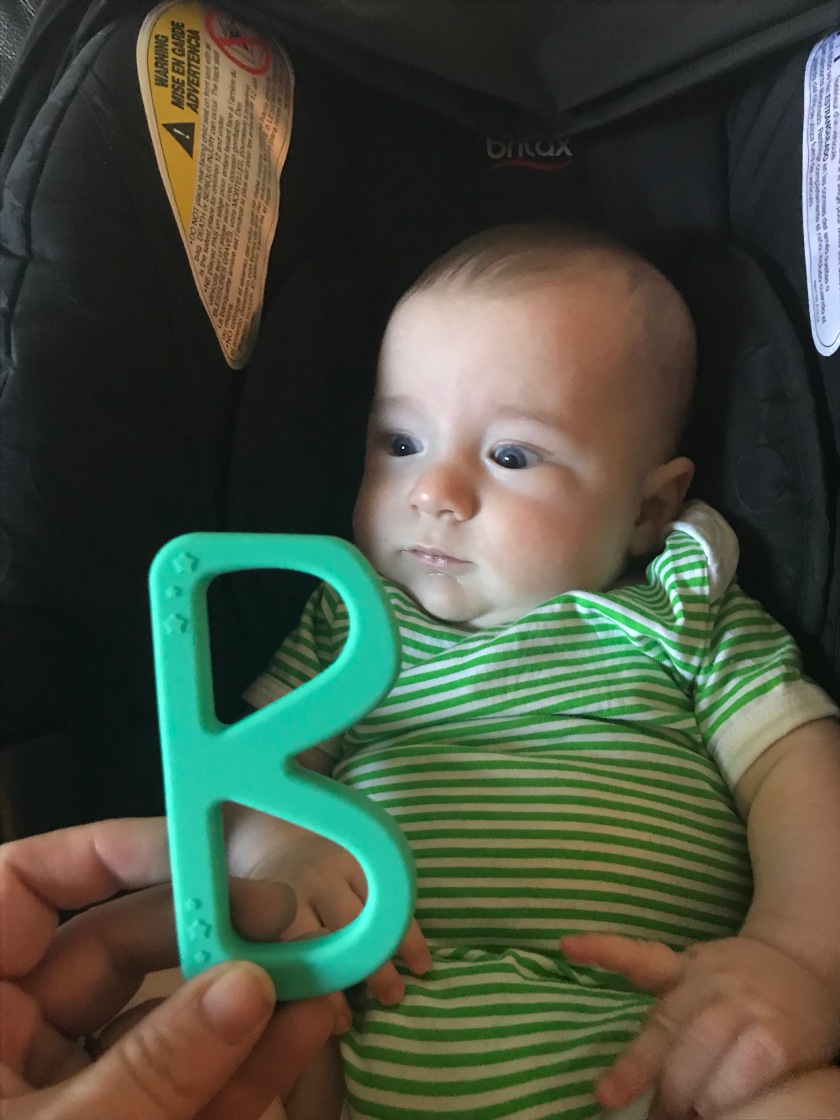 So since they are glasses, William has them upside down in this photo when he first tries them out. 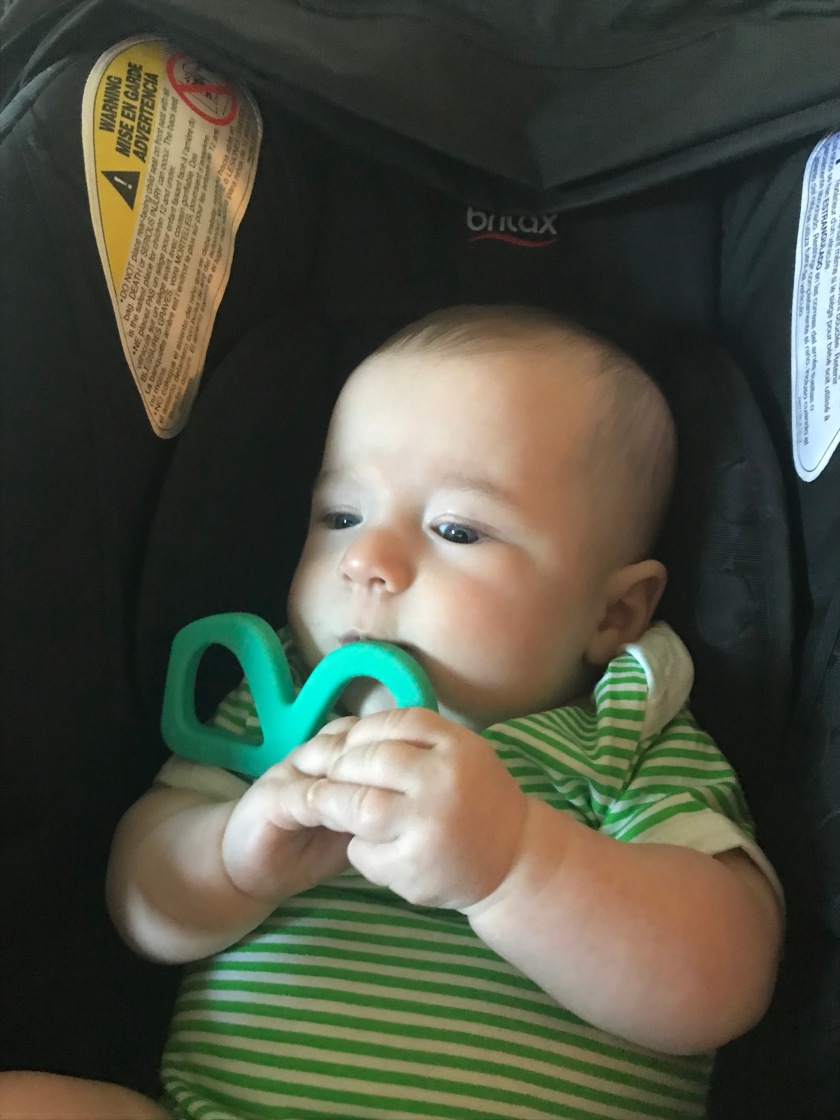 At first William was more interested in chewing on his own fingers than trying the chew toy. Since the toy was a great shape with an appropriate thickness and felt very well made, we did hope he’d give it a good try before rejecting it.

Soon though he had it in the position I had handed him the toy, chewing on it as if it was meant to be a B after all. 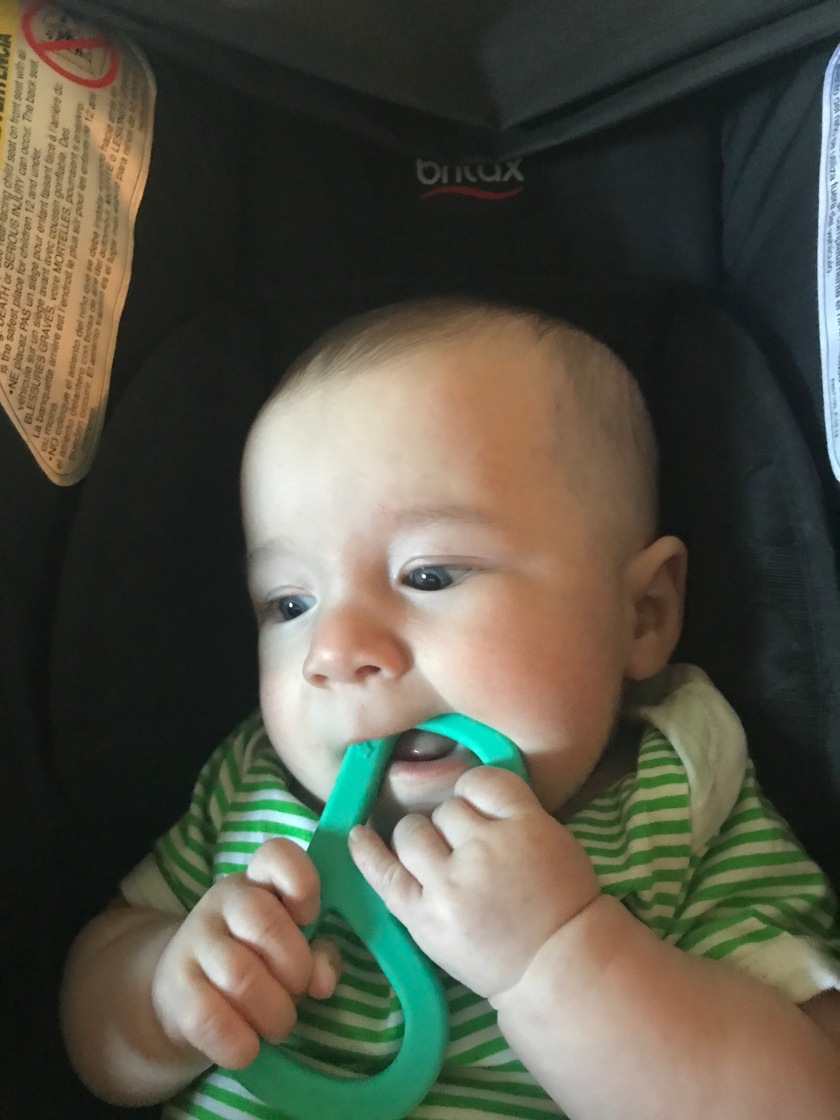 To our great amazement, unlike the other teething toys we had given him so far, this one he figured out right away what to do with and how to hold it comfortably for himself. 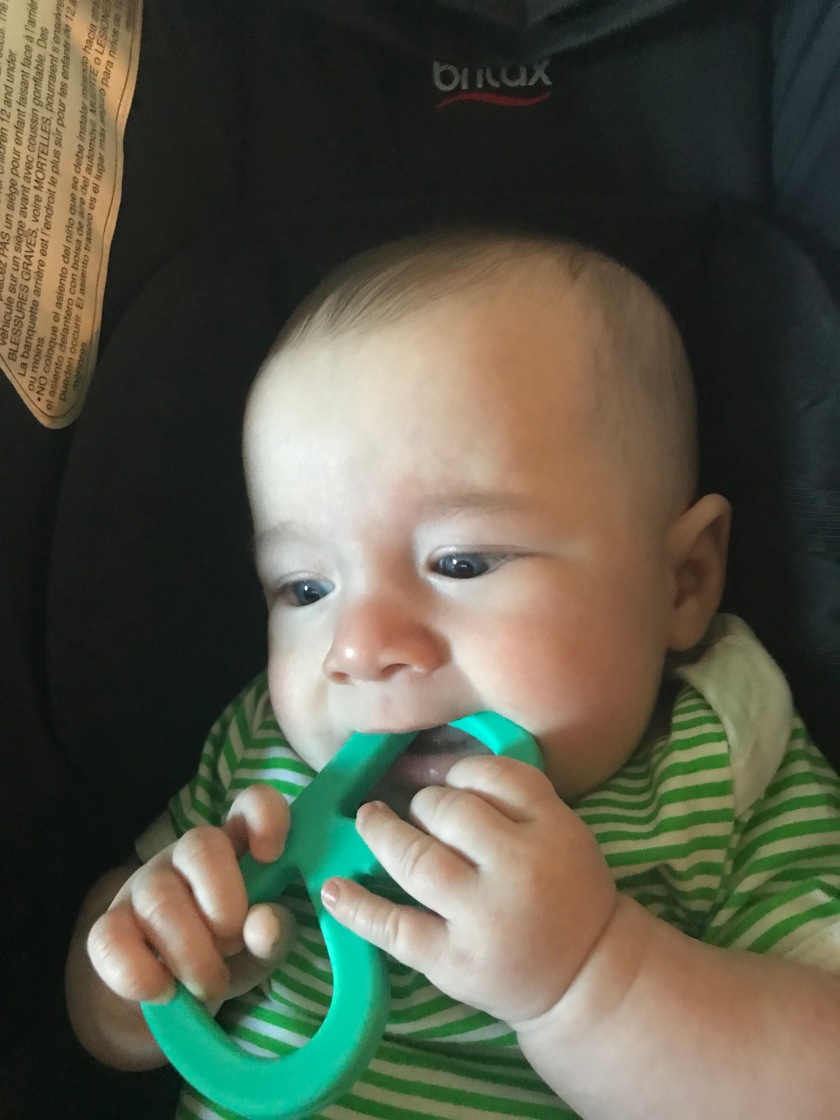 He really enjoyed using this and appeared to get a lot of comfort out of it. I love how he is actively gripping it with both hands in several of these photos.

Even when he gripped it only with one, he still was very focussed on using the teething toy.

At one point, I thought perhaps he was done using it. So we waited to see what he’d do with it next.

It turned out he wasn’t done, he just wanted to try another angle, and he came up with this one, having the B shape backwards.

William used this teething toy for longer than he has any other we bought for him. He’s used it happily several times since then, sometimes for longer periods of time than others. He’s so happy using it, which in turn makes us so happy.