I was excited to start receiving the email to be a Shepherd in church again. I’d greatly enjoyed the opportunity to help with the children’s ministry while pregnant. I had told Peggy Joy that if William was in a happy mood (or was sleeping) he’d been joining us, however, if he was in a fussy mood I would put him in the church’s nursery. She had said he was OK to stay either way, however, I told her if he was fussy it would be distracting for the children. The first test was the music played, as depending on the song played and instruments used, this may or may not have effected his mood. So I was delighted to see it was one of our church’s rare times to use the beautiful and soft sounding bell choir.

Wiliam was alert and happy during the choir songs. So, I took him out of his stroller and held him so he could see the choir as well as hear them.

I love that Pastor Mariellen is part of the choir. She really seems to enjoy ringing the bells during her part. If the rehearsal time is ever one that fits in my schedule, I would love to join them as well.

Then, halfway through the service it was time for me to go with the children as the Shepherd. The first part of their Bible studies involved listening to Peggy Joy reading the story of Naomi, Ruth and Boaz to them.

One of the boys asked why the baby was there. I reminded them that the last time I’d been Shepherd I’d been pregnant with my son. He and the other children were OK with that explanation, so Peggy Joy moved on with her part of the lesson.

After they heard the story, she made the lesson interactive with having them practice learning a song they will be singing in front of the church soon as surprise.

She also lead them in a quick prayer and then it was time for the next part of the lesson.

Mia explained they would be making a fun treat that had something to do with the story they had just heard. As they were watching one boy happened to remember having seen William before and referred to him as “that guy who got baptized”. I was surprised the leader did not use this a moment to explain that each of them had been baptized, perhaps even at this same church, but she did not.

As the story had mentioned the importance of grain, they would be making marshmallows with their choice of chocolate and/or peanut butter to add Rice Krispies to represent grain. They would also be working on another non related treat just for fun. 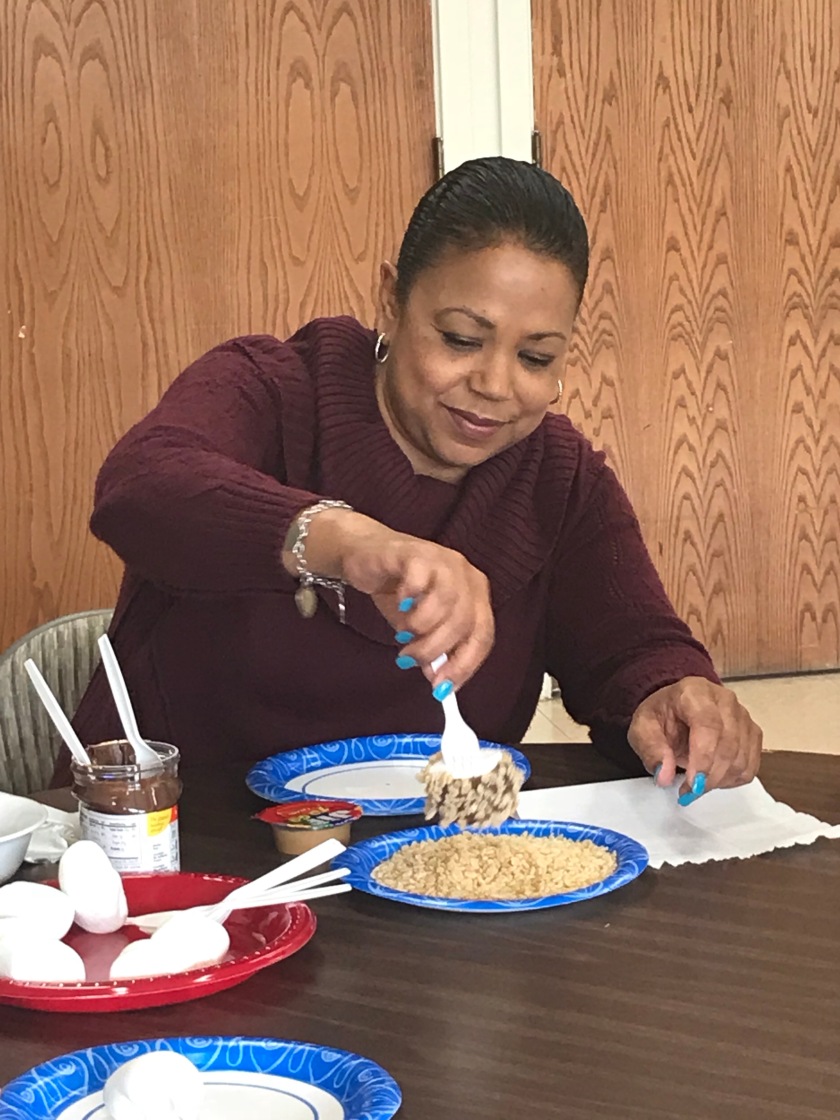 In a moment of incredibly good timing, the children were sent to wash their hands as William was getting very fussy. I used this time to take him to the church nursery and come back.

The children varied in how they decorated the first project. Some put as much of the toppings on as possible.

Another put on only a little in a creative stripe pattern. When I asked, she replied she wasn’t a fan of the toppings, so she had fun using them in a creative way using only a tiny bit of each. 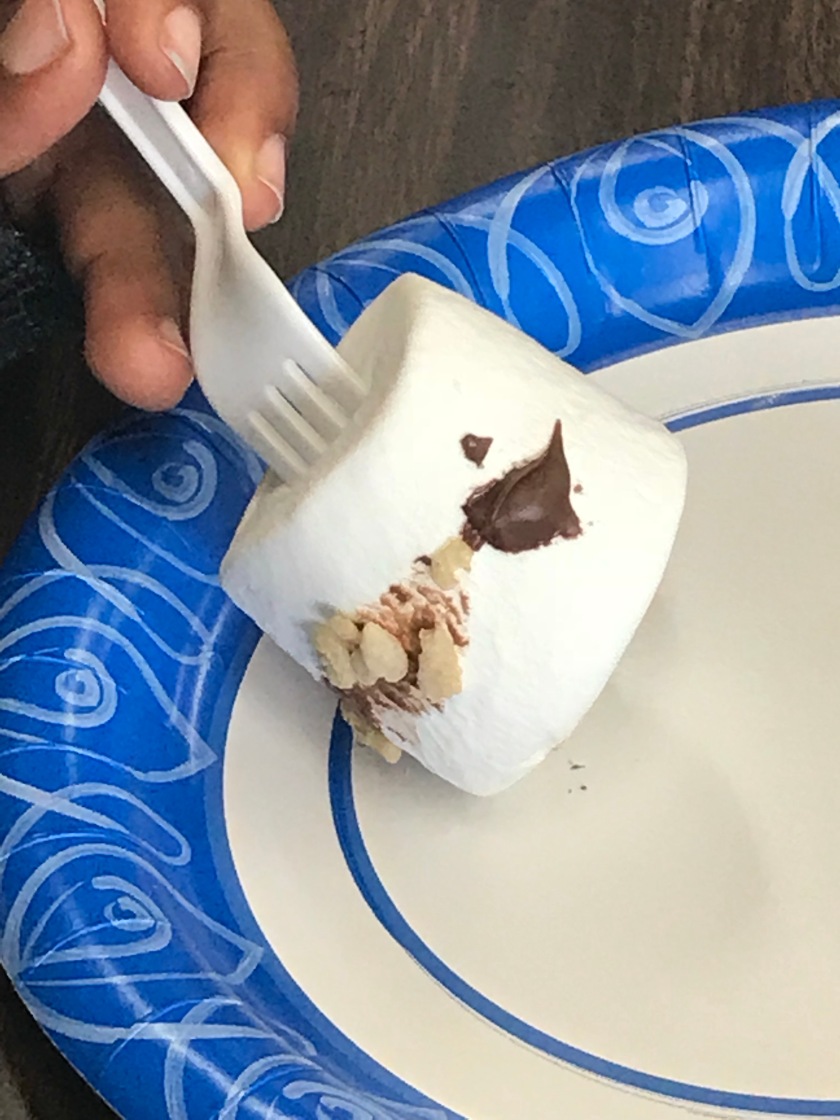 After they finished the first part, it was time for the second dessert, decorating cupcakes. Each child was given two each.

It was fun seeing the creative designs they made. 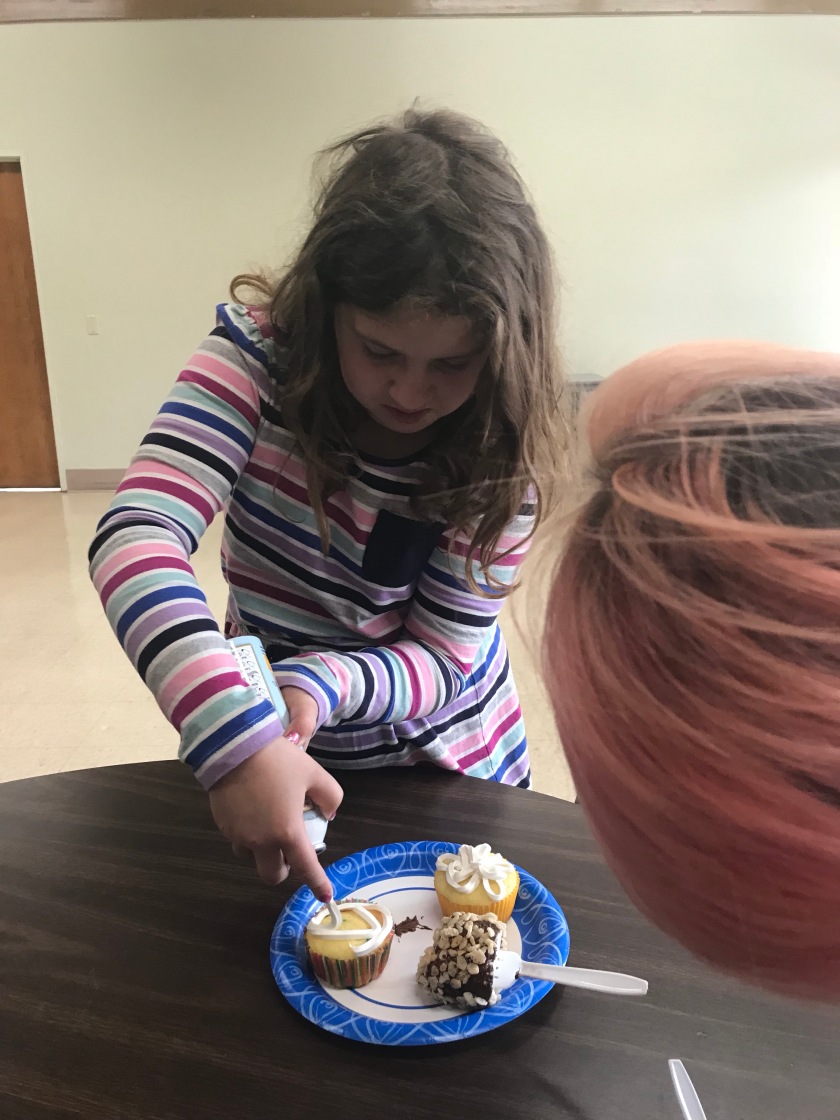 They had their choice of icing and sprinkles colors. The white icing tended to come out slower and more evenly than the blue.

To my surprise and delight I was allowed to decorate treats as well. One child knew right away that my cupcake design was for Love William.

It was great having the chance to talk more with Maya who was a new nursery provider for the church. Peggy Joy said she was happy Sonia had had a chance to have a baby to watch on her first shift with our church.