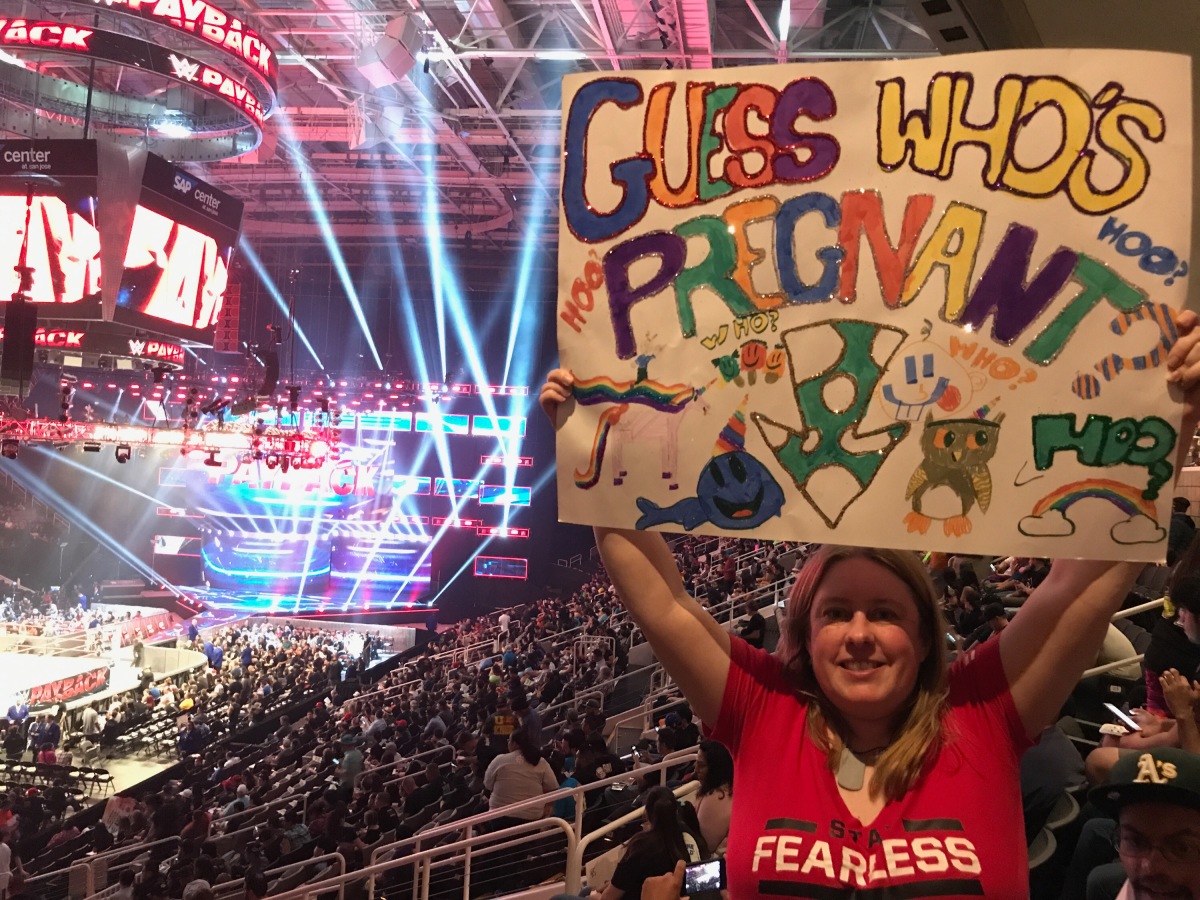 Matt and I have always been huge professional wrestling fans, having both followed the sports entertainment since when we were kids, when the WWE was known as the WWF. We’ve attended Wrestlemania 31 (and other Wrestlemania week events), a house show and two RAW episodes.

As Payback was in San Jose, we eagerly bought tickets and I used chalkboard markers and my most recent sonogram to make a sign commemorating baby’s first PPV (in utero), as well as bringing others we will be using in our pregnancy reveal shoot. This was our first PPV that we attended that friends attended and we met up with as well. Matt’s friend Tania, her husband Mike and daughter Sammy were attending separately and Sammy made me this amazing reveal sign based on The New Day “Who? Who?” gimmick. We had fun taking some photos outside with the signs. Inside the arena after the event, Matt and I went to take a selfie, yet Tania and Jeremy, the latter who went with us and was at his first WWE event ever, both made sure to get in the shot as well as we left space in the shot. 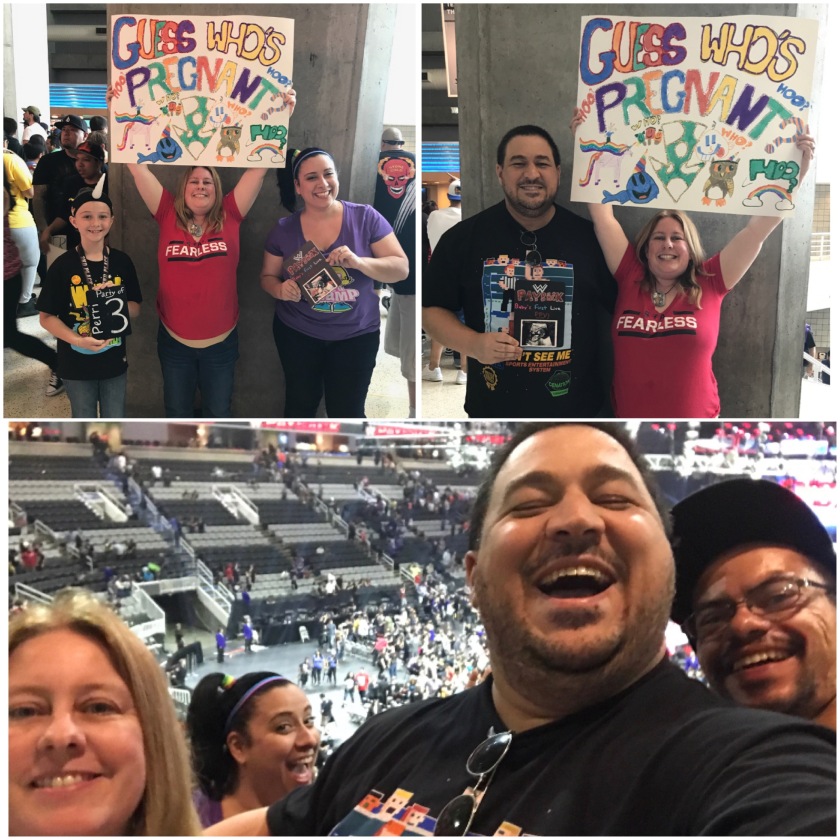 We had great seats and as I had a wall behind me, I was able to hold up my sign without blocking anyone’s view. This is one of my favorite pre-show shots. 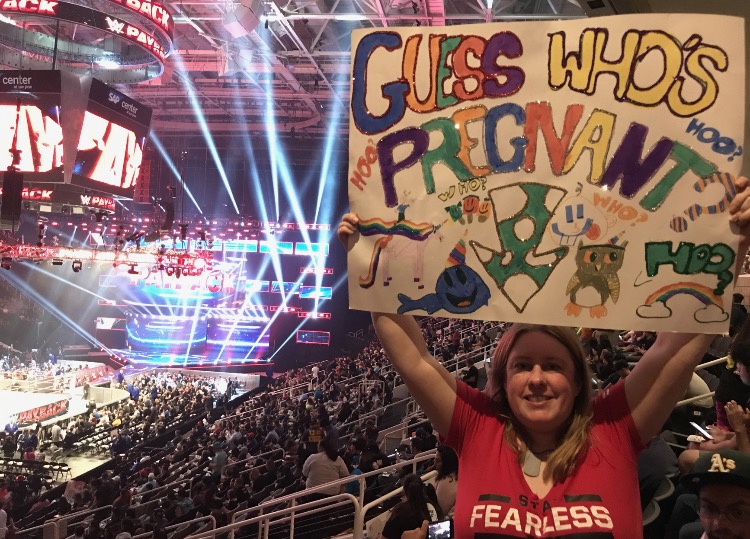 Matt and I wanted to travel light, so we did not take a full sized camera with us (as Matt had for Wrestlemania). We both use our phones to get some photos and videos. Here are some of my favorite shots from the event, while there is lots of pixelation I like the moments they capture a lot.

Chris Jericho defeated Kevin Owens with the Walls of Jericho finisher and interacted with fans including a young boy after showing his nice guy/face side. 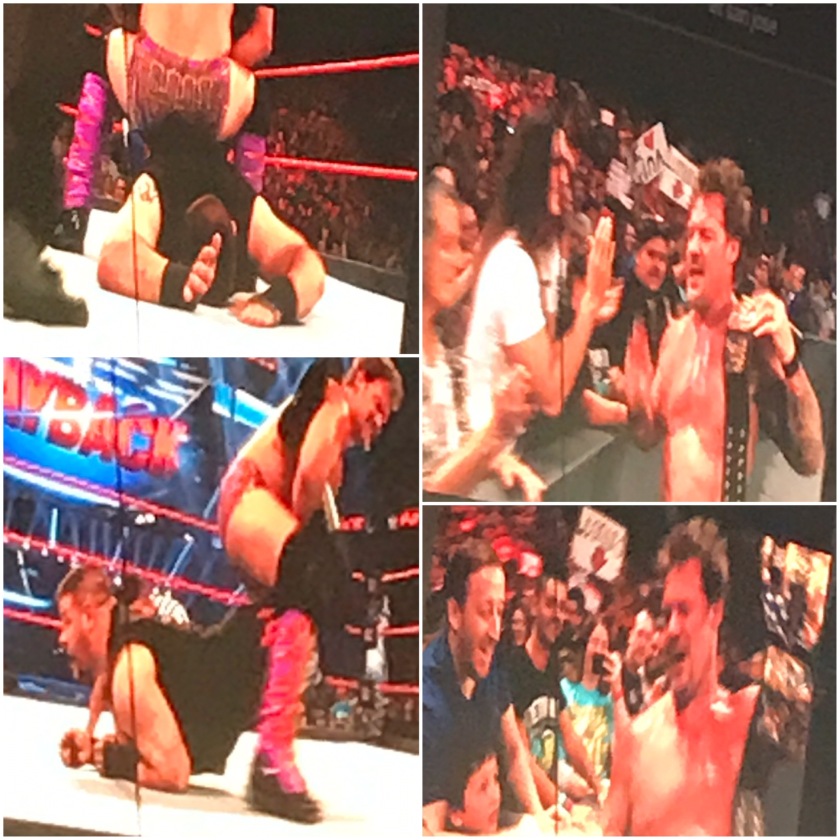 The Hardy Boys has an amazing visual intro and though Cesaro used his famous swing, they defeated Sheamus and Cesaro. 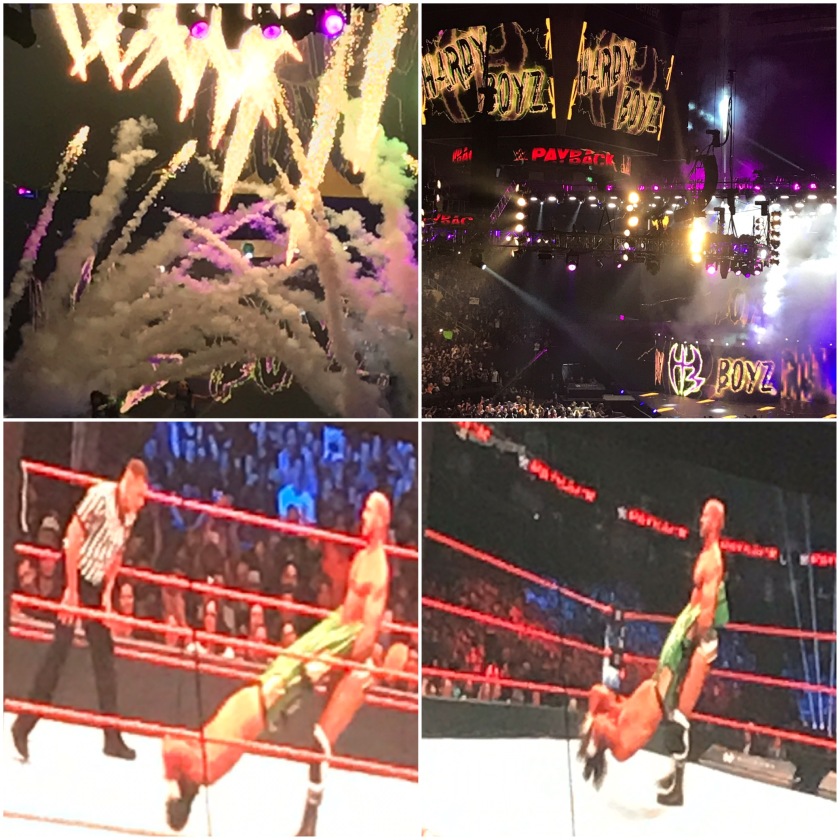 Baley has a great, fun and childlike intro. Despite being billed from San Jose, she lost the match and Women’s Champion title to heel Alexa Bliss. 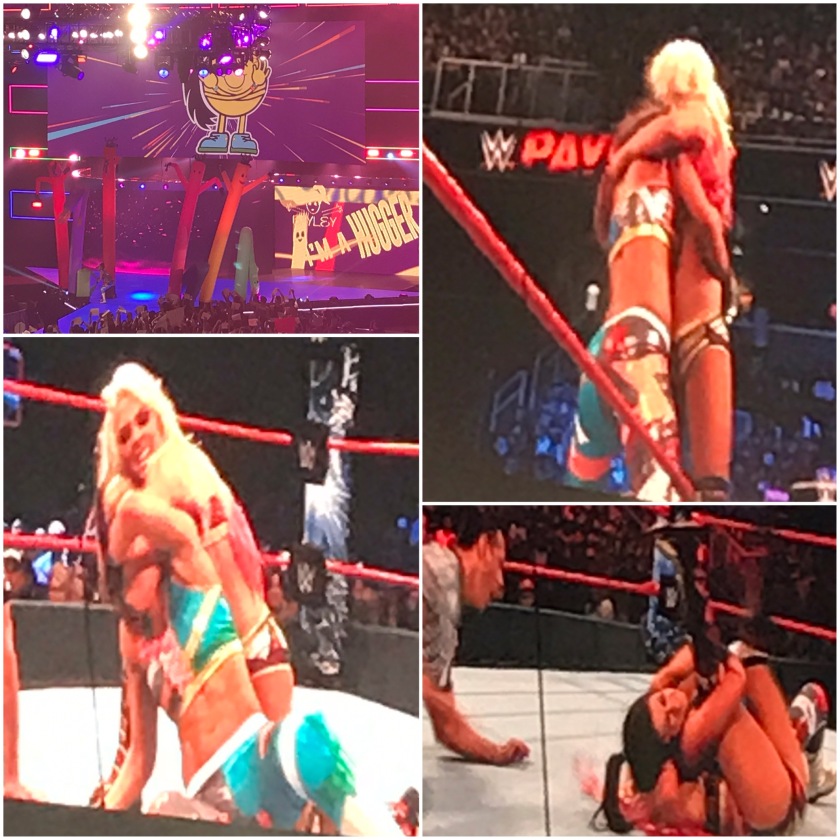 Samoa Joe got some great moments of squeezing Seth Rollins, yet to the surprise of many, Seth won his event. 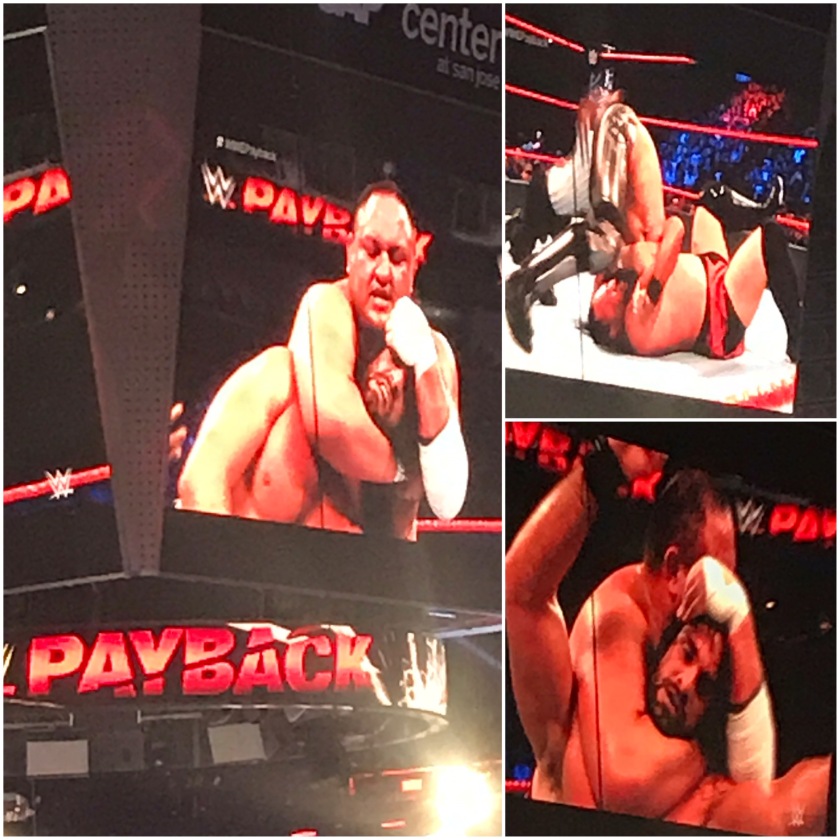 The headline match was Braun Strowman, relatively new to WWE vs. Roman Reigns. Matt and I have enjoyed cheering for Roman, to the point where Matt promised to cheer Roman on with me as part of our wedding vows. Still, Roman was destroyed by Braun. 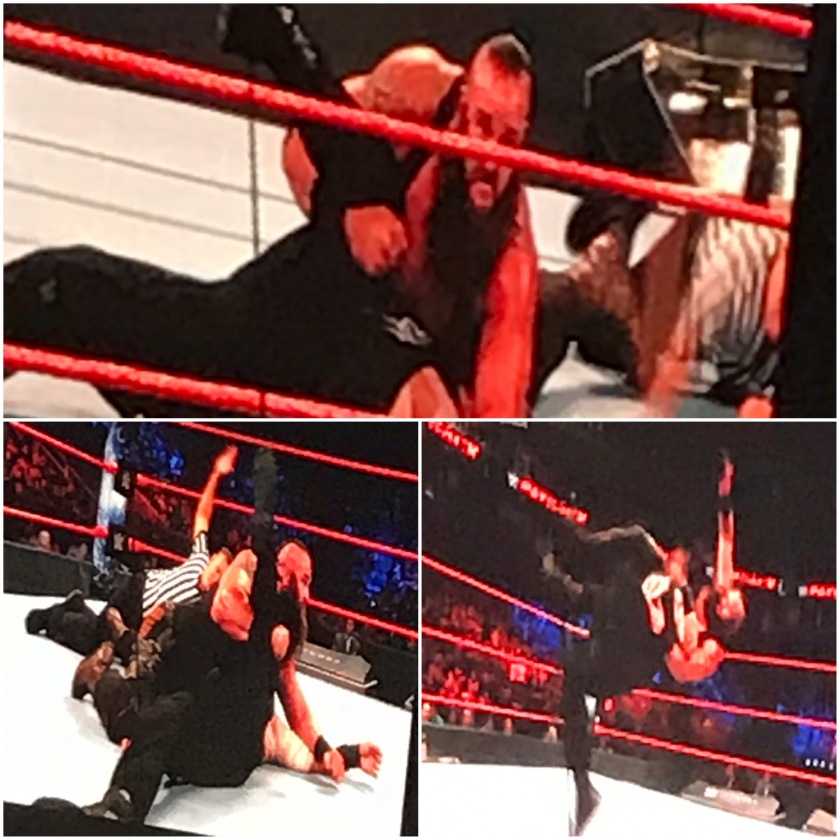 After the show we were delighted to run into superfans dressed as their favorite old school wrestlers. They allowed Matt (whose John Cena shirt was also fairly old school and a Christmas present from me from last year) and I to get a few shots with them. 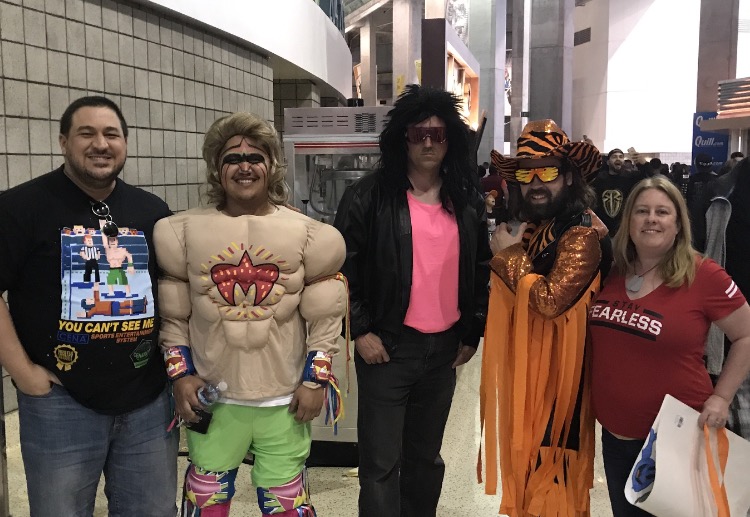 After the photos, I realized, I needed one more to complete the night. I begged them to let me be in just one more with a special sign, I don’t they looked at the sign or had any idea what I was revealing, but it was a great moment and I was so happy to have them in our photos. 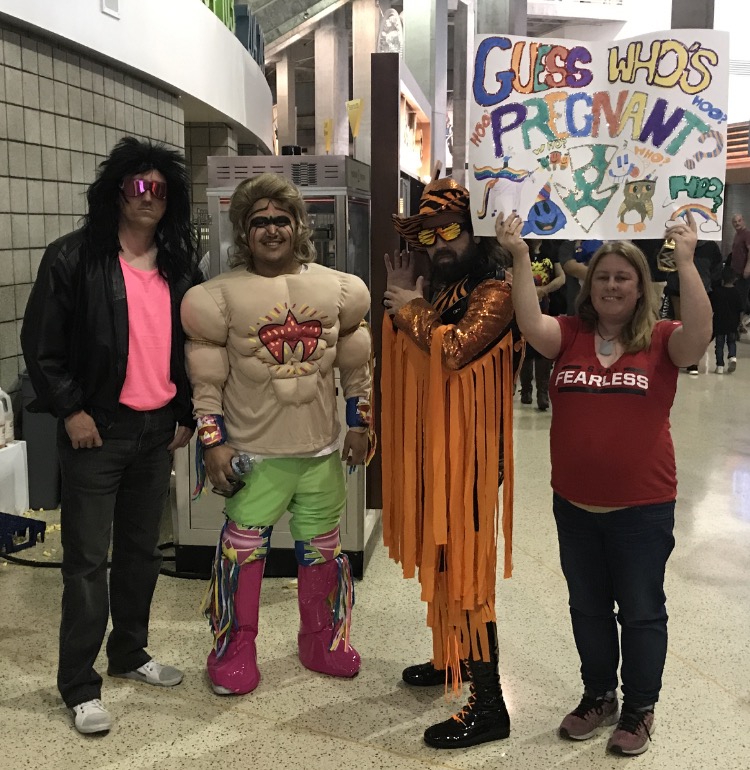