Soon after I posted my Pregnancy Questions and Answers post, a friend who read it told me that Target was soon releasing a gender neutral line of baby items called Cloud Island. Intrigued by the idea, Matt and I went to Target today to see if we should add them to the places where we are registered which includes Buy Buy Baby which I blogged about as well. Target does not have consultants who help you select items, they just give you a scanner to scan items. 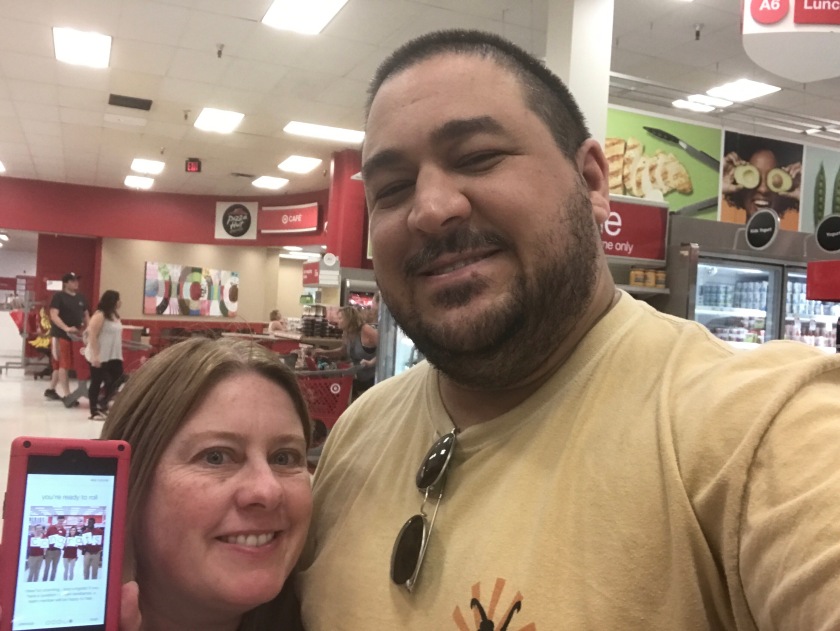 Cloud Island has only been out for a few weeks. When I stopped by our local Target yesterday to get details of how we would add registry items in store, the Customer Service representative at first could not find it as she was looking for it as Thousand Island, the name of a popular salad dressing. I also learned yesterday that both the store and the surrounding ones did not have Welcome Bags for those who were starting a baby registry. The manager who stopped by to help with finding the bags told me he believed the were discontinuing them.

The customer service rep today did not give us any instructions, just handed me the scanner. After putting in my email address and password, it showed scanning instructions and these congratulations.

The representative did not know where the Cloud Items were, instead he suggested asking someone at the fitting rooms to show us. Matt and I being unfamiliar with the layout of this store walked around until we stumbled upon the baby aisle. One of the first things I saw was this adorable Superman and Batman bib set, so it was the first thing I scanned.

To my surprise, though the item added on my first attempt, a message appeared saying it was discontinued.  Despite the fact that there were many of them right in front of me, they seem to have limited quantities overall.

We walked around the baby selection seeing many things that we had in Buy Buy Baby. The Cloud Island items were not readily visible. We still hadn’t seen a sales person for the section, so Matt joked perhaps we would have better luck if we tried with the salad dressings.

After wandering and scanning a few items, several of which also came up discontinued, I heard a customer getting a question answered. I followed the Target salesperson after she had finished with him, and asked her where Cloud Island was. She knew exactly where it was and showed me to it, where it took up one side of an aisle.

Though I like a lot of the soft colors being used, to me the pinks look more stereotypically for girl babies than boy babies. If our child is a girl, we may buy some pink items for her, but we will not be doing so until after the birth. However, other colors are also  well represented in the collection. They have many things that coordinate well with one another. Ironically when asked what crib sheets and other items he liked, Matt gravitated towards the whales in blue, as I had when I had checked out the collection online. In fact, the first item I had added to our registry while online was the blue whale plush toy. (The second was a plush brown teddy bear.)

Since we both liked the whale for sheets I also added this whale bath cloth and toy.

Target has an example of how you could use all Cloud Island items to have a beachy theme with many whale things in it. While this is a bit more masculine than I’d do for a gender neutral themed nursery, they do have some good ideas we might put into play.

With the addition of Target to our registry (we have one link on The Bump which allows all retailers to be seen in one convenient location) we should be all set with retailers. I like that they have locations all over the country so they are convenient for those who may want to see the items they are considering buying in person. It’s hard to believe my baby shower is only a few months away.